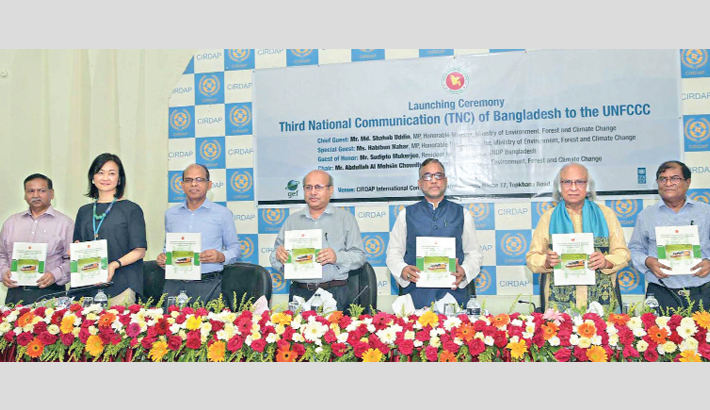 Environment, Forest and Climate Change Minister Md Shahab Uddin along with others holds the copy of a book titled ‘Third National Communication (NTC) of Bangladesh to the UNFCCC’ at its launch at the CIRDAP auditorium in the capital on Wednesday. — SUN photo

Experts at a function on Wednesday said it is high time for Bangladesh to pay attention to climate change mitigation along with adaptation as the country is heading towards higher middle income country.

They came up with the call at the ‘Third National Communication of Bangladesh to the UNFCCC’ report launching ceremony held at CIRRAP in the capital, reports UNB.

The emission of the country is gradually increasing which portrays the trends of current economic growth.

The launching ceremony organised by the Ministry of Environment, Forest and Climate Change (MoEFCC), highlighted the process of creating the inventory of greenhouse gas sources and estimate through systematic data collection and proper analysis, described in the Third National Communication (TNC) report.

As a signatory to the United Nations Framework Convention on Climate Change (UNFCCC), Bangladesh prepared the “Third National Communication” with financial and technical assistance of the Global Environmental Facility (GEF) and the United Nations Development Programme (UNDP).

The Third National Communication, which is already submitted to the UNFCCC in 2018, reflects the firm commitment of the government of Bangladesh to the Convention.

“Compared to other countries, Bangladesh emits relatively little amount of the greenhouse gases due to anthropogenic factors,” said Environment Minister Md Shahabuddin at the launching ceremony as the chief guest.

He said, “Although we do not have any international obligation for climate change mitigation as per common but differentiated responsibilities principle under UNFCCC, we are taking measures to show solidarity with the international community.”

Climate Change Specialist and Chairman, PKSF Dr Qazi Kholiquzzaman Ahmad, in his keynote said, “Although mitigation issue is not obligatory for us due to low pollution in comparison to developed countries, we can still reduce emissions by increasing energy efficiency in energy, transport and industries sector.”

He said, “As a part of the global obligation under UNFCCCC, the government of Bangladesh has prepared the TNC in accordance with the guidelines adopted by the Conference of Parties (COP).

The report provides an updated status of national circumstances along with greenhouse gas inventory for 2006-2012 of different sectors and measures to facilitate adequate adaptation and appropriate mitigation.”

Kyoko Yokosuka, Deputy Resident Representative of UNDP Bangladesh in her remarks said, “The TNC has generated baseline data required for the assessment of greenhouse gas emission from five key sectors and mitigation options.”

She hoped that adaptation and mitigation measures proposed in the report would be useful for the government and development partners to promote the Sustainable Development Goals and green growth.

“Our capacity building support for climate resilient development and green growth to the government will continue,” Kyoko added.

The report covered national circumstances, inventory of greenhouse gas emissions in Bangladesh, programmes containing measures to mitigate GHG emissions, studies on vulnerability and impacts, programmes containing measures to facilitate adequate Climate Change adaptation and mitigation and other information relevant towards achieving the objective of the UNFCCC and the constraints and gaps in relation to financial, technical and capacity-wise needs.

Participants from various ministries, departments, development organisations, civil society, universities, NGOs and media were present in the launching ceremony, according to UNDP.