Garden of Memories to be screened at Goethe-Institut today 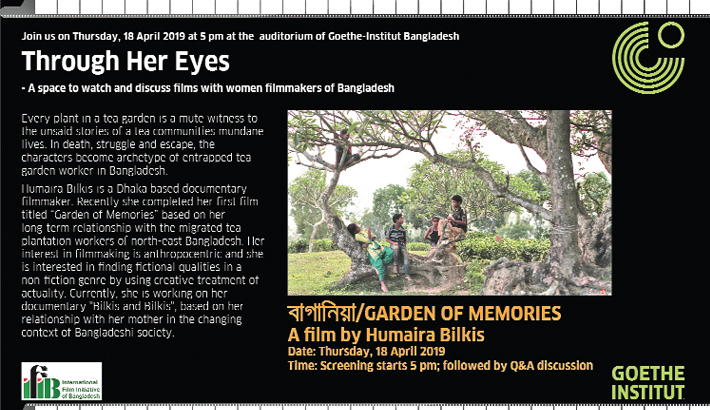 Bagania’ (Garden of Memories), a documentary by Humaira Bilkis, will be screened at the auditorium of Goethe-Institut Bangladesh today.

It will be screened at 5pm under the Through Her Eyes initiative which provides a space to watch and discuss films with the country’s women filmmakers. It will be followed by a discussion.

The story of the documentary is about a tea community’s mundane life where old chieftain Padmoluv, awaits his death and often reminisces the past controlled by colonial masters. Young worker Sojoy, feels trapped but continues the grind. However, School drop-out Chandan wants to elude the exploitation. Every plant in the garden is a mute witness to the unsaid stories of their lives. In death, struggle and escape, these characters become archetype of entrapped tea garden worker in Bangladesh.

Bilkis has used her long-term relationship with the migrated tea plantation workers of north-east Bangladesh as the subject matter of Bagania.

The Dhaka-based documentary filmmaker’s interest in filmmaking is anthropocentric and she interested in finding qualities in a non-fiction genre by using creative treatment of actuality.

Currently, she is working on her documentary ‘Bilkis and Bilkis’ based on her relationship with her mother in the changing context of Bangladeshi society.