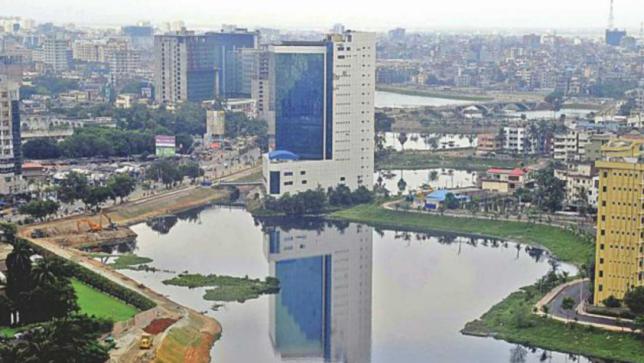 Blaming the Export Promotion Bureau (EPB) for construction of their building in the middle of the Hatirjheel canal, outgoing President of Bangladesh Garment Manufacturers and Exporters Association (BGMEA) Siddiqur Rahman on Wednesday said they will go for legal action against it if necessary.

“We’d sought land to the then Prime Minister near Sonargaon Hotel for the BGMEA building. However, EPB gave us the land in Hatijheel canal which was a mistake. We bought the land at Tk 5.17 crore but didn’t realise it properly where the land was allotted and that was another mistake,” he said.

Siddiqur Rahman made the remarks while speaking at a views-exchange meeting with journalists at the new BGMEA building in Uttara.

“It’s natural that I would feel sad as we used the Kawranbazar’s office for around 14 years. I used the office for three years and seven months as the BGMEA president,” he said replying to a query.

The BGMEA chief said they built the new building in Uttara following all the rules and regulations.

As his attention was drawn to the issue of seeking time from the court to demolish the BGMEA building, he said, “As the current BGMEA president, I didn’t seek any time for demolishing the building. If anyone sought time, we want him/her to face punishment,” he said.

Earlier in the day, a legal notice was served on BGMEA President Siddiqur Rahman requesting him to withdraw a petition filed with the Supreme Court seeking a one-year time for demolishing its building illegally constructed in the middle of the Hatirjheel canal.

Claiming that their business is now facing many challenges, Siddiqur Rahman urged the government to provide 5 percent cash incentive for the garment industry in the upcoming national budget. “We’ve raised 51 percent salary for workers. Our total cost has increased by 25-30 percent. However, buyers haven’t raised product prices.”

He also urged the National Board of Revenue to exempt VAT for the garment sector and automate the customs audit.