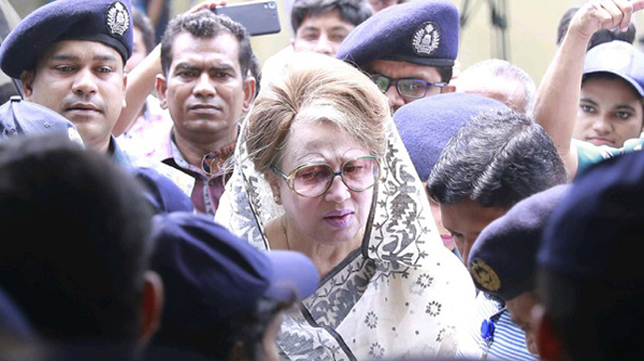 A Dhaka court on Wednesday adjourned till April 30 the hearing in Gatco graft case against BNP chairperson Begum Khaleda Zia and others as the prime accused were absent like last few hearing dates.

Today was set for holding hearing on charge framing, but the jail authorities couldn’t produce Khaleda Zia before court as she is undergoing treatment at Bangabandhu Sheikh Mujib Medical University (BSMMU).

The Anti-Corruption Commission (ACC) filed the case against 13 people, including Khaleda and her younger son Arafat Rahman on September 2, 2007, with Tejgaon Police Station for their role in corruption regarding penning a contract with Global Agro Trade (Pvt) Co Ltd (Gatco) for container management at inland container depots in Dhaka and Chittagong.

Formal charge was submitted against 24 on May 13, 2008. But of the 24 accused, six including Arafat, Saifur Rahman and Matiur Rahman Nizami have died so far.

The BNP chairperson later filed two writ petitions with the High Court challenging the legality of bringing the case under emergency power rules and sought stay on the proceedings of the case in the trial court.

The High Court on July 15, 2008, stayed the trial proceedings of the case and issued separate rulings in this regard.