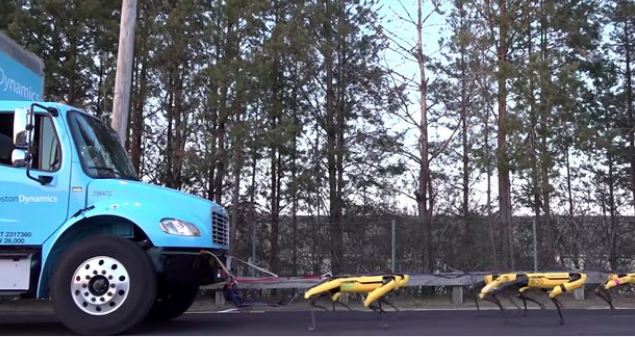 From navigating around complex rooms to opening doors, Boston Dynamics’ robotic dog , SpotMini, has a number of skills up its sleeve.

Now, the tech firm has trained the robots to work in packs - and together, they’re strong enough to haul a truck across a car park.

Boston Dynamics revealed the incredible new skill in a video on its YouTube channel.

It said: “It only takes 10 Spotpower (SP) to haul a truck across the Boston Dynamics parking lot (~1 degree uphill, truck in neutral).”

Many viewers were quick to point out the hilarious similarity to the reindeers pulling Santa’s sleigh.

One wrote: “Dashing through the snow, like the AI only know, going our way, only during the day.﻿”

SpotMini is a four-legged robot that looks very similar to a dog.

It contains a range of sensors, including stereo cameras, depth camera, and position/force sesnors, allowing it to carry out a range of tasks, unaided.