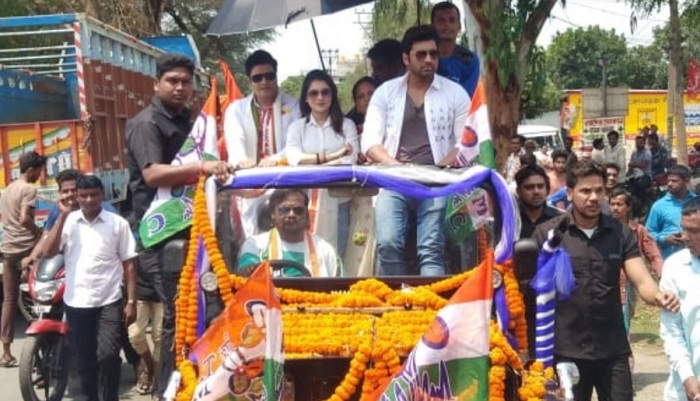 The Bharatiya Janata Party (BJP) leaders on Tuesday met Election Commission officials in Kolkata to complain against the participation of Bangladeshi actor Ferdous at an election rally of the Trinamool Congress (TMC).

“We understand that foreign nationals can’t participate in electioneering process in India. When TMC is using Bangladeshi nationals (actor Ferdous) for campaigning, they are breaking the rules. He should be arrested for breach of visa rules,” Majumdar was quoted as saying by ANI.

Reports say that the three actors along with the TMC candidate participated in a road show from Karandighi to Islampur.

Ahmed reportedly even told a gathering that everyone “should vote for the Trinamool Congress and Didi (Mamata Banerjee)”.

In its complaint, the BJP said that Ferdous’ participation is a violation of the Model Code of Conduct (MCC).

Expressing surprise, BJP Bengal chief Dilip Ghosh asked if Banerjee will now get Pakistani PM to campaign for her party.

“Tomorrow, Banerjee will invite Pakistan Prime Minister Imran Khan to campaign for the TMC,” he said.

BJP leader Pratap Banerjee said that the decision to include Ferdous in the campaign process shows “Trinamool Congress’ love for Bangladeshis”. He reportedly said that the party wants to consolidate minority votes in Raigunj.

Defending the party’s decision, TMC minister Madan Mitra asserted that his party “will not do anything that is anti-national, illegal or violative of the MCC”.

Countering the BJP’s charge, Mitra said that the EC should also take action against BJP candidates and leaders who brandished swords on Ramnavami.

Many Bengali actors have long been associated with the TMC either as campaign magnets or as candidates. The party has fielded actors like Nusrat Jahan and Mimi Chakraborty in this Lok Sabha election.