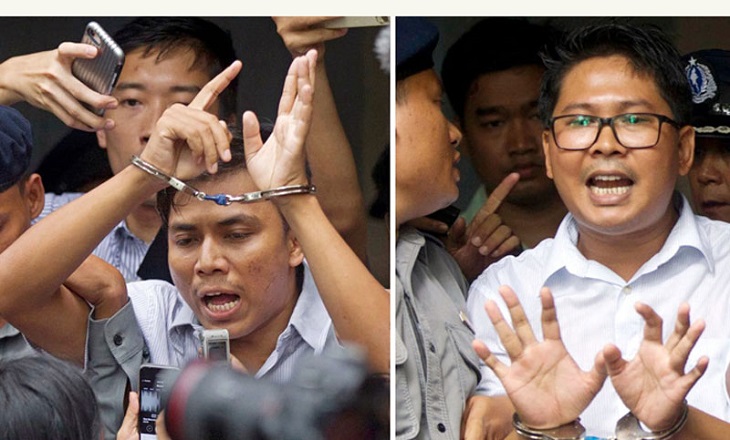 Two Reuters reporters have been awarded one of journalism's most prestigious prizes while locked in a cell in Myanmar's most notorious prison.

On Monday in New York the Pulitzer Center handed its award for International Reporting to Reuters staff, with a special mention for Wa Lone and Kyaw Soe Oo who are serving seven years in Yangon's Insein Prison for "exposing state secrets."

The men led an explosive Reuters investigation into the killing of 10 Rohingya men in the far western village of Inn Dinn -- part of a military-led campaign against the Muslim minority which began in 2017. The Myanmar government denies human rights abuses, saying it was targeting Rohingya militants who attacked police posts in August 2017.

More than 720,000 Rohingya are estimated to have been forced to flee into Bangladesh as a result of the ensuing violence.

As the military tore through Rakhine state, allegedly killing with impunity, raping women and burning babies alive, authorities turned on the reporters trying to investigate the atrocities.

Wa Lone and Kyaw Soe Oo say they were set up by a police officer posing as a source. They say that in late 2017, officers invited them to a secret meeting at a restaurant on the outskirts of Yangon and handed them documents.

Police swooped and arrested them with the classified information in their possession.

Now, as Myanmar's Supreme Court hears their final appeal against conviction, Pulitzer administrator Dana Canedy announced that the pair had been inducted into the elite group of winners. This was "for expertly exposing the military units and Buddhist villagers responsible for the systematic expulsion and murder of Rohingya Muslims from Myanmar, courageous coverage that landed its reporters in prison."

The reporting was "not just based on testimonies of victims, which are key and incredibly important, but it includes one after another stories from the people who actually did this, and in some cases were actually proud of what they had done," Reuters Myanmar bureau chief Antoni Slodkowski told CNN late last year.

In April 2018 seven soldiers were sentenced to "10 years in prison with hard labor in a remote area" for their part in the Inn Dinn massacre, where the victims were forced to dig their own graves the day before they were beaten, stabbed and shot to death.

The Reuters reporting elicited the only admission of guilt from the Myanmar government, which routinely rejects criticism of the actions of its troops in Muslim-majority villages in the far west of the mainly Buddhist nation.