The entire wooden interior of Notre Dame Cathedral has been lost 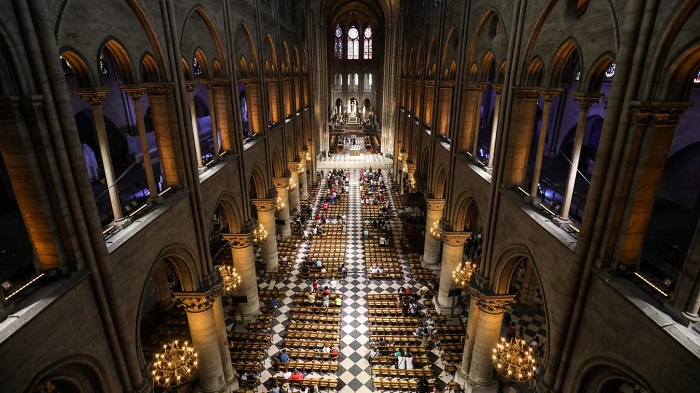 A "forest" of wooden latticework inside Notre Dame Cathedral fueled the fire that consumed the iconic church.

The medieval roof structure "has been lost," according to Monsignor Patrick Chauvet, the rector of the cathedral.

The cathedral's wooden frame, which primarily consisted of oak, contains beams that date as far back as the first frame built for the cathedral. That frame featured trees cut down between 1160 and 1170, forming one of the oldest parts of the structure.

Most of the current frame dates from the year 1220, according to the church's website. The modern frame is the second frame, and reflects adjustments made early in the cathedral's construction process.

The prevailing Gothic style called for high vaulted ceilings. To accommodate this, the cathedral's plans required tall, sturdy oaks from a nearby forest.

To kick off the project, workers cleared 21 hectares of oak. Each beam of the intricate wooden cross-work was drawn from a different tree: estimated at 13,000 trees in total. To reach the heights the carpenters needed to build the structure, those trees would likely have been 300 or 400 years old, meaning they would have sprouted out of the ground in the eighth or ninth centuries.

The beams formed one of the oldest structures in Paris.

The dimensions of the framework are soaring: 100 meters long and 10 meters high. At the nave of the church, the frame is 13 meters wide, and at the transept it's 10 meters high, the church's website says.

During the Middle Ages, the carpenters first built the frame on the ground to get the dimensions and structure right. Then workers would have disassembled the frame, hoisting it up with lifting gear to the ceiling, where it would have been reassembled. Once in place, the beams extended toward the heavens at steep 55-degree angles.

The wood frame structure supported a roof, made of lead, that weighed 210 tons. The lead frame had the advantage of being fire-resistant, according to the National Library of France. But the wood that supported that lead roof is what burned.