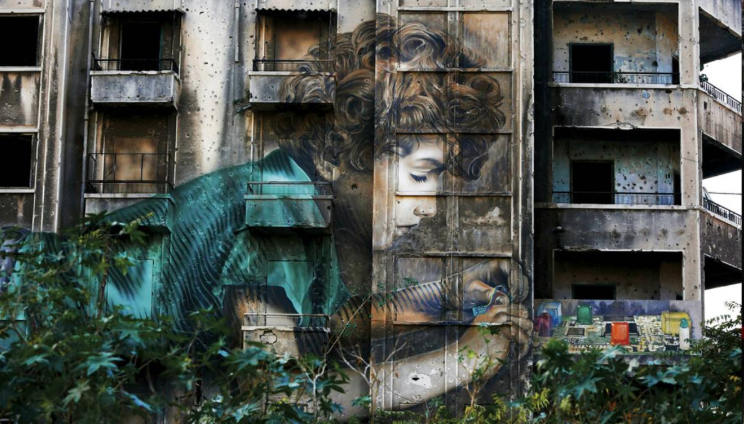 They are a common sight around Beirut, but their presence barely registers with Lebanese citizens anymore.

Nearly 30 years after civil war guns fell silent, dozens of bullet-scarred, shell-pocked buildings are still standing — testimony to a brutal conflict that raged for 15 years and took the lives of 150,000 people.

Some are Beirut landmarks, like the iconic Holiday Inn, a hulking, bullet-riddled blue and white building that towers over the capital.

The hotel, which opened for business just two years before the war broke out on April 13, 1975, was destroyed early on during battles between rival factions and used as a sniper's nest. It has stood deserted and untouched since then, its shareholders locked in a dispute over its future.

There's the modernist movie theater that never was, nicknamed locally "The Egg." Its moldy skeleton stands as a ruin, its future unclear. Like the Holiday Inn, it is a curious attraction for visiting foreigners.

There are also a few remaining residential buildings located along the former Green Line, which separated the mainly Muslim part of West Beirut from the predominantly Christian part, their ravaged facades a testimony to the horrors witnessed many years ago. They still stand, either because their owners have no money to fix them, or because of disputes over ownership.

"Seeing these buildings is like being slapped in the face," said Sahar Mandour, a Lebanese journalist and a writer. "You're walking around going about your daily business when suddenly you come face to face with a scene that takes you back to the old days."

Unlike others who dislike the sight of these buildings and think they should be demolished, Mandour, 42, says it's important that they stay for the nation's collective memory, to never forget a war that pitted Palestinians against Lebanese, Christians against Muslims, Christians against Christians and every other combination possible. Israel also stepped in, adding to the destruction.

"For a foreigner, it is a destroyed building. For us, it is a painful reminder of the bullets that pierced our bodies, streets and walls," Mandour says. "I don't want these buildings to disappear, their mission is not over yet."

Not everyone feels the same. A woman who rents an apartment in a bullet-scarred building on the former Green Line between the mainly Muslim Shiyah and Christian Ayn el Rummaneh districts, said she worries about her two sons and society judging them for where they live.

She keeps plants on the veranda and on the stairs to compensate for the building's grim facade.

"If I had somewhere else to go, I would," she said, identifying herself by her nickname, Imm Lebnen, or mother of Lebanon.