Inter-caste marriage: On the run for love in India 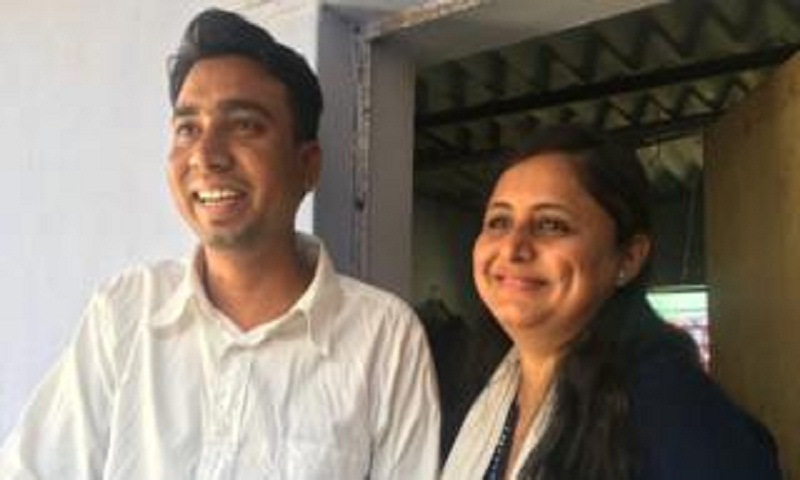 Most Indian families still prefer marriages arranged within their religion and caste. Marriages outside these rigid boundaries have often led to violent consequences, including "honour" killings. But some young Indians are still willing to defy their families and communities for love, reports the BBC's Divya Arya.

Ravindra Parmar knew that pursuing a relationship with an upper-caste woman would be dangerous.

He is a Dalit (formerly known as "untouchable"), a caste that sits at the lowest rung of India's social ladder. The woman he fell in love with, Shilpaba Upendrasinh Vala, is a Rajput - a Hindu warrior caste near the apex of the system.

The yawning gap between his position and hers is something rarely bridged in Indian society.

"We are not even allowed to walk past their area and I had dared to marry into their family," he says.

"Those who marry inter-caste are seen as aliens. The perception is that they are terrorists who revolt in society."

Ravindra and Shilpaba were born and brought up in two villages separated by more than 100km (62 miles) in the western state of Gujarat.

They met on Facebook and would spend hours taking digs at each other.

But all that friendly banter had a deep impact on Shilpaba.

"I was like any other village girl limited to home and college, but he broadened my horizon, made me realise that my life has more meaning," she says.

Social media has opened a space that did not exist a few decades ago. Rigid caste and religious divides meant that the possibility of meeting, interacting and striking friendships in public places was neither possible nor encouraged.

The caste system is hereditary, and the practice of marrying within the caste ensures that the hierarchy is perpetuated. Caste divisions have deep roots in history and Dalit men who have married women from upper castes have been killed.

Marriages across caste or religion in India are uncommon. According to the India Human Development Survey, only about 5% of Indian marriages are inter-caste.

The onus of upholding tradition, culture and "purity" falls on the woman and if she marries outside traditional boundaries, she is seen as besmirching the honour of the community and her family.

The anger and backlash can lead to violent attacks and killings.

Shilpaba had to flee from her village to marry Ravindra. But the threat of violence has continued to hang over them: they have moved between houses and cities a dozen times in the past three years. Ravindra is a trained engineer but had to leave his job and has had to do daily-wage labour wherever they have lived to make ends meet.

Shilpaba says the stress became unbearable. They started blaming each other for their situation and she even contemplated taking her own life.

"Ravindra convinced me out of it, as that was no solution," she says. "Now we are both studying law with a vision to take up human rights cases and make our parents proud through our work.

"Maybe then they will see that we didn't take this decision to just have fun and they will accept us."

The latest data available from the National Crime Records Bureau (NCRB) shows that 77 murder cases in 2016 were reported with "honour killing" as the motive.

Such violence is highly under-reported and these numbers do not accurately reflect social attitudes that may be growing more conservative.

A 2016 survey, Social Attitudes Research for India (Sari), conducted across Delhi, Mumbai, and the states of Uttar Pradesh and Rajasthan found the majority of respondents opposed to inter-caste and inter-religious marriages.

In fact they were in favour of a law banning such marriages.

"It is quite shocking that despite rising levels of literacy and education, prejudicial beliefs do not reduce. In fact, they are worryingly high," says Professor Amit Thorat of Jawaharlal Nehru University, who worked on the Sari survey.

"Religious and traditional values around hierarchies, around the notion of purity and pollution seem to be more sacrosanct and valuable than human rights, the right to live or the right to marry by choice."

Bibi Ayisha and Aditya Verma were 17 years old when they fell in love. They too found each other on Facebook. That they were born into different religions - she is Muslim, he is Hindu - did not matter to them. But their families fiercely opposed the relationship.

Aditya was born and grew up in Delhi. After finishing school, he enrolled in a college in the southern Indian city of Bangalore only because Ayisha lived there. But that sign of his dedication couldn't win her parents over: he was still a Hindu.

Madly in love, and after waiting for two years, Ayisha ran away with Aditya. They moved to Delhi but, like Ravindra and Shilpaba, they still did not feel safe.

"We were so scared that for five months we stayed in a room. Neither of us was working at that time. I thought if I stepped out, I would be killed, because I was Muslim and he was Hindu," says Ayisha.

In February 2018, 23-year old Ankit Saxena was murdered in broad daylight in the capital Delhi for having a relationship with a Muslim woman.

The woman's parents and two others were arrested and the trial is ongoing.

Ayisha says that after that incident, the fear of a possible honour killing started feeling very real.

"Even if we went out briefly, I was constantly looking around and if I saw anyone with a beard, I thought that they were members of my family coming to kill me."

Her fears have been set against the backdrop of an India where religious polarisation is increasing. A Hindu nationalist government has been in power since 2014 and is accused of normalising anti-Muslim sentiment.

"I think the present environment is such that rather than bringing people and religions together, it is trying to fan the fires of division," says Prof Thorat.

He is quick to point to the violent partition of India to underscore that such beliefs have existed for more than half a century, but believes that efforts to bridge divides are lacking.

Ayisha's parents like Aditya but are not ready to accept him into their family unless he converts to Islam. Aditya's parents are equally unwilling for the marriage unless Ayisha adopts Hinduism.

Both of them are opposed to adopting the other's religion - and losing their own.

"When we fell in love, I knew she was a Muslim and she knew I was Hindu. We don't want that any of us should lose our identity," Aditya says.

India passed a law in 1872 that enables legal registration of a marriage between a man and woman of different religions or caste without any conversion.

Aditya found out about the Special Marriage Act through Asif Iqbal and Ranu Kulshreshtha, a couple who married inter-faith back in 2000.

Soon after their marriage - in the aftermath of the anti-Muslim riots in Gujarat in 2002 - they witnessed targeting of couples like themselves and a lack of any support mechanisms.

They set up an organisation called Dhanak, which spreads legal awareness and provides counselling as well as safe houses to couples who want to marry inter-faith or inter-caste.

But awareness about the Special Marriage Act is very low. It also has a rule that requires a notice about the intended marriage to be displayed at a public place for a month, giving opportunity to anyone to place an objection.

"This provision is often misused by fanatic Hindu groups like Bajrang Dal, Vishwa Hindu Parishad, and Muslim organisations like Nizam-e-Mustafa, who would approach the families and pressure them to stop their daughters as daughters are easy targets," explains Asif Iqbal.

According to him, the local police also do not encourage such marriages and instead play an active role in stopping them, especially in smaller towns.

"The government needs to do more in sensitising the police and legal officers about this, as the law helps in stopping conversion yet still enabling inter-faith marriage," she says.

But she adds that lasting change cannot come only by enforcing laws, but by changing social mindsets.

Acceptance is key for the survival of such couples as they deal with severe social and economic isolation.

The Dhanak network has helped Ayisha feel safe. She has now met many couples like her and Aditya, and it gives her immense hope.

"If you trust your partner and love them very much, then nothing else should matter. You should not waste time worrying about family and society. They will come around eventually," she says.

After their marriage, Ravindra and Shilpaba decided to change their surname to Bharatiya, which means Indian.

They decided to drop their original surname since it revealed their respective castes.

Ravindra is an idealist - he believes that more inter-caste marriages will lead to a future in India where caste divisions will cease to be an issue.