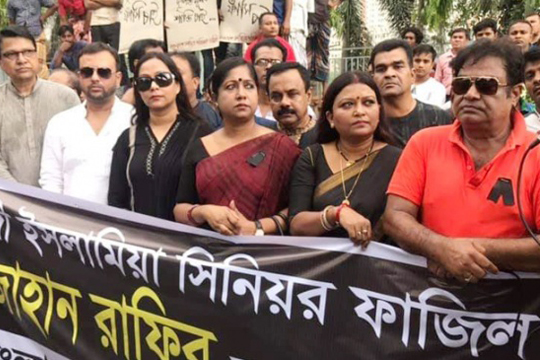 To kill yourself is to accept defeat. I will not do that. Rather I will stay alive and punish the one who caused me to suffer. And through punishing him, I will make an example of him, such that other perverts like him may learn a lesson. He will get such punishment which will teach others. I will give him the toughest punishment Insha Allah.”

Those are the words of Nusrat Jahan Rafi from a letter which she possibly intended to send to her two closest friends, but she succumbed to burn injuries before she could do that.

News about our women folk being abused in different ways has become almost random. Madrasa student Nusrat Jahan Rafi, who died of burn injuries after being torched, is one of the latest incidents about cruelty against a fellow human by a madrasa principal Siraj-ud-Dowla. This teacher of Islam did just the opposite of what his faith taught us -- respect for women.

Nusrat may have left for heaven, but she has ensured the toughest punishment for Dowla and his accomplices with Prime Minister Sheikh Hasina pledging to ensure that the culprits get the maximum punishment possible. The madrasa principal may get the death penalty as Nusrat’s case is a murder.

But, as per Nusrat, will the other perverts learn from the punishment Dowla is expected to face? Only time can say that.

Many incidents of rape, stalking or other forms of abuses are never reported. Many cases go unreported as many abused women shy away because of how the society would treat them once they shared their sad story.

The other is the refusal by police to register General Diary or case against culprits like Dowla. Media reports said many policemen, instead of taking sides with the victims, sided with the accused that are usually powerful or linked to the powers that may be.

Muscle power is a major problem for Bangladesh. In almost all areas these muscle power denies the right to seek justice. With it is of course are those with ill-gotten wealth and who think they are God, the untouchables.

We too are at fault. We stand and watch. The fear of “getting involved” makes us stay away as the powerful can do anything. We naturally fear for our lives, our families and our daughters. It is only in the movies we thought, especially the Hindi ones on our cables. But now it is out of the silver screen to challenge us --- “we have burnt Nusrat to death. Can you do anything to us?”

The horror struck Nusrat, but in fact it struck the core of humanity. It struck the hearts and minds of all sane people.

Yes, Nusrat does not belong to the influential and powerful family, and it is just another incident which will wither away in time and will not remain even in our memories. Police allegedly have been slow in Nusrat’s area to deal with the situation and it took quite some time to detain the suspects. They cannot find a person Nusrat mentioned – Shampa. The mystery deepened when another girl was brought to the court.

We all know if our police want, they can unravel any mystery. They are a very capable force and they must be empowered to do their job without fear and then we can see major changes in social crimes like rape and abuse. Every thana must have a woman police officer who will be in-charge of taking care of women in trouble, whether sexual, family or property disputes.

Father of the Nation Bangabandhu Sheikh Mujibur Rahman recognised all women abused by the Pakistani Army as his daughters to show respect and ensure protection from society blinded with age-old taboos of shame instead of recognising the agony of these women. To stand by them instead of sharing the ugly incidents carried out by men like madrasa principal Dowla.

Independence Award winning self-made late sculptor Ferdousy Prioyabhashini made her story of rape and abuse by the Pakistani Army in 1971 public in 1999 to seek respect and compassion for all war women.

A little about Nusrat’s tragedy for readers who are wondering who is this Nusrat, who lost her battle to live and bring to justice those who torched her causing more than 80 per cent burn injuries, at the Burn Unit of the Dhaka Medical College Hospital, the best in the country. Attempts to fly her to Singapore failed as she was too weak to undertake the journey.

Nusrat filed a complaint with police accusing a madrasa principal of sexual harassment and thus she was set on fire just a few minutes before her Alim (equivalent to HSC) examination on April 10, 2019 by four people.

Prime Minister Sheikh Hasina is angry and has ordered that those responsible be brought to justice to ensure maximum punishment. This is nothing less than a murder and we hope the courts would judge on that line.

Cases of rape are reported daily in the newspapers. Even a two-and-half-year-old baby girl was raped by a teenager. We need to think why women are being raped in this time of use of Hijab, especially teen-aged boys getting restless and resorting to other crimes.

In most cases, these youths are addicts or are glued to Hindi movies, some of which show such incidents of rape. The youth must not have access to movies showing only intimate shots.

It is time to take steps to closely study why these hate and lust about women are getting so frequent. We need to protect our women folk. They are our mothers and future mothers. We need to talk about it in schools and colleges as young men grow up. We should not shy away.

Awareness without sex education would not have much impact as we can see. Three eminent women rights activists told the Bangladesh Protidin that they were concerned about these incidents.

Author and litterateur Selina Rahman is of the opinion that the attack on Nusrat and abuse on women were examples of social degradation. It is a curse on humanity. Education from the families to their children was important, but the state must take serious steps to end such abuses. The resistance must come from all sides.

Thus the madrasas should be under scanner and sex education along with major awareness programmes must be undertaken as these help to stop abuse of women if they are shown as a person of respect -- a mother or a sister.

The writer is a Consulting Editor of daily sun.