Frescoes and faeces as Nero’s palace opens in Rome 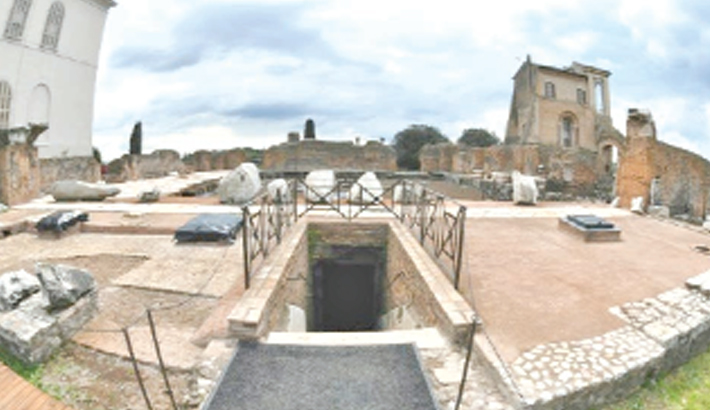 ROME: Razed to the ground by the Great Fire of Rome, Emperor Nero’s original palace opened to the public for the first time on Friday after a painstaking 10-year restoration, reports AFP.

The ruins of the sumptuous “Domus Transitoria”, once decorated with gold leaf, precious stones and mother of pearl, lie next to a well-preserved 50-seat latrine used communally by builders and slaves.

Nero claimed to be a descendant of Aeneas—a legendary hero of the Trojan War, as Homer tells it in the Iliad—and was a big fan of Trojan heroics.

He had the ceilings of his palace adorned with mythical scenes from the Trojan War, some of which are now on display at the Palatine Museum next door.

The palace was designed to provide respite from baking summer heat, and the emperor would likely have sat on a marble throne facing a line of fountains, under the shade of a silken canopy, according to archaeologists.

But the emperor, said to have committed suicide as his enemies closed in on him, did not have long to enjoy the “Domus Transitoria” (Transit House), so-called because it allowed him to “transitare” (walk through) the area from the Palatine to the Esquiline hills. On a summer’s night in July 64 A.D. a fire broke out in Rome that would rage for nine days and reduce much of the Eternal City to rubble. The ruins of the palace show traces of that immense blaze.

Nero wasted no time in drawing up plans to erect a new and even more magnificent palace in its place—the Domus Aurea or Golden House—a landscaped palace among gardens boasting vineyards, pastures, woods and an artificial lake.

One of the best-preserved parts of the complex are the toilets, most likely used by construction workers for the Domus Aurea.

The walls are painted red to hide the dirt, and a channel running along the ground once carried water that would have wetted sponges on sticks used to clean nether regions.

The speed with which Nero embarked on the new project fuelled rumours that the fire had been started on his orders.

Legend has it that the man who became emperor at just 16 played his lyre—or fiddle—on a hill while Rome burned below him.

According to Tacitus, the senator and historian who lived at the time of the fire, Nero blamed the devastation on the Christian community.

Those convicted were torn to pieces by wild dogs, nailed to crosses or burnt at the stake to light the city at night.

Almost all of the columns, floors and marble walls at the Domus Transitoria were removed to build baths for another emperor, Trajan.

The building is recreated in two video installations and a 3D virtual reality experience.