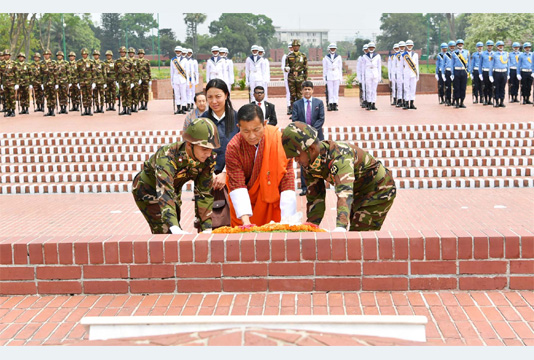 The Bhutanese premier paid the homage placing a wreath at the portrait of Bangabandhu in front of the Bangabandhu Memorial Museum at Road-32 in the noon.

The Bhutanese premier was briefed about the history of the Father of the Nation and given the tour of the museum by Saima, the granddaughter of Bangabandhu.

Earlier, the Bhutanese prime minister paid his homage to the memories of liberation war martyrs by placing wreath at the altar of the National Memorial at Savar.

After laying the wreath, he stood in solemn silence for some time as a mark of profound respect to the memories of the martyrs who made supreme sacrifice for the independence of Bangladesh.

A smartly turned out contingent drawn from the three services gave a state salute, while bugle played the last post on the occasion.

He also signed the visitors’ book and planted a sapling at the National Memorial premises.

In the morning, the red carpet was rolled out as Bhutanese Premier arrived in Dhaka this morning on a three-day official visit to Bangladesh at the invitation of Prime Minister Sheikh Hasina.

Prime Minister Sheikh Hasina received the Bhutanese premier at the VVIP Terminal of the airport.