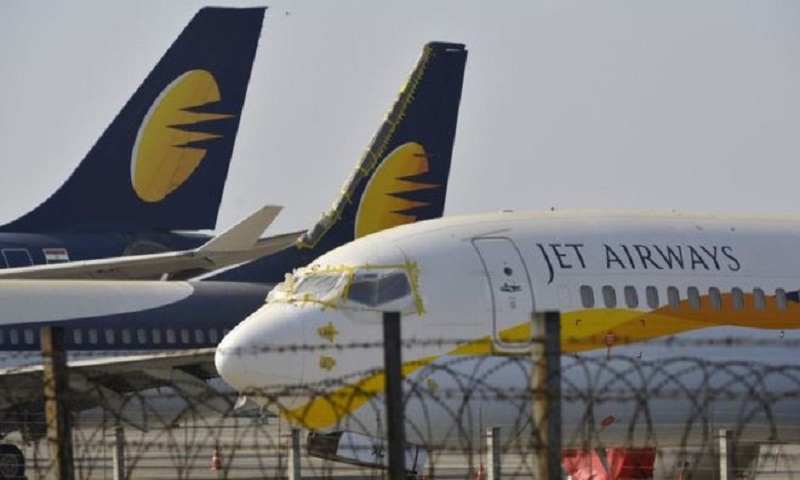 Jet Airways appears to have suspended all its international flights, raising fresh fears about the Indian airline's survival.

This comes after the carrier on Thursday grounded 10 more planes over unpaid fees to leasing firms.

Carriers in India must maintain a fleet of least 20 aircraft to continue to operate international services.

The airline, saddled with more than $1bn (£765m) in debt, is seeking a financial lifeline to avoid collapse.

Various India media reported on Friday that Jet Airways had cancelled all international flights, which include services to Europe and Asia.

In a statement on Thursday, Singapore's Changi Airport said Jet Airways had "suspended its services to and from Singapore until further notice".

All Jet Airways' international flights scheduled to depart on Friday from Delhi - to Singapore, London, Amsterdam and two to Kathmandu - are cancelled, the airport website says.

And according to the official website for London's Heathrow airport, Jet Airways' Friday flights to Mumbai and Delhi will not operate.

In recent weeks it has grounded aircraft and cancelled thousands of flights - disrupting passengers locally and around the world - as its financial strains grew.

The airline has more than 100 aircraft in its fleet, and flies on 600 domestic and 380 international routes.

In a statement to the Mumbai Stock Exchange late on Thursday, Jet Airways said an "additional 10 aircraft have been grounded due to non-payment of amounts outstanding to lessors".

The airline did not respond to BBC requests for comment on the size of its current fleet or operations.

They also reported that India's aviation ministry may review the regulations setting the fleet cap that could allow the airline to resume international services.

The cash-strapped airline is chasing fresh investors to keep flying.

A consortium of investors led by the State Bank of India (SBI) took control of the airline in March.

The group is searching a new investor to acquire a stake of up to 75% in Jet Airways. The deadline for bids had been extended to Friday, according to reports.