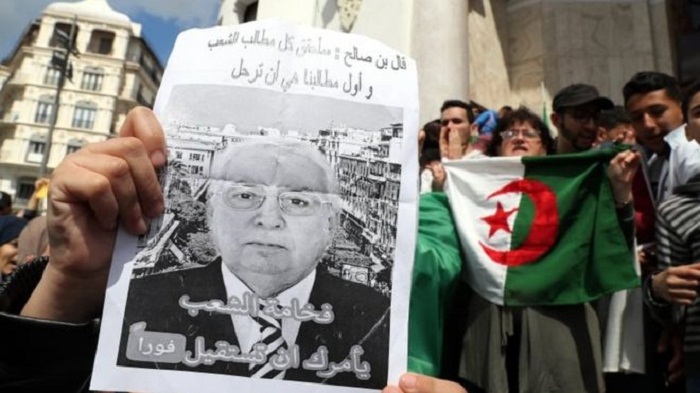 It comes after a wave of protests led long-term President Abdelaziz Bouteflika, 82, to resign last week.

The temporary appointment of Mr Bensalah, speaker of the Algerian parliament's upper house, has frustrated some protesters who hoped for more radical change.

Following the announcement, crowds took to the streets of the capital, Algiers, demanding he step down.

Mr Bensalah had pledged to hold free elections within 90 days in line with the country's constitution, but many see the 77-year-old as too close to the former president.

What do protesters want?

Protests started in February with anger focused on the country's ruling elite, not just Mr Bouteflika,

Placards and online posts have been demanding an end to "Le Pouvoir", or the establishment, meaning that all those around the former president should also go.

About 70% of the country's population is under 30, and youth unemployment is high.

In a televised speech, he cautioned protesters about demands that could undermine the country's constitutional integrity.

He also said the judiciary should investigate "the whole gang" - a term used for the former president's inner circle.

Mr Bouteflika was considered by many as being a front for a group of businessmen, politicians and military officials who were said to really control the country.

Protests so far have largely been peaceful, although tear gas and water cannon were used by security forces on Tuesday and Wednesday.