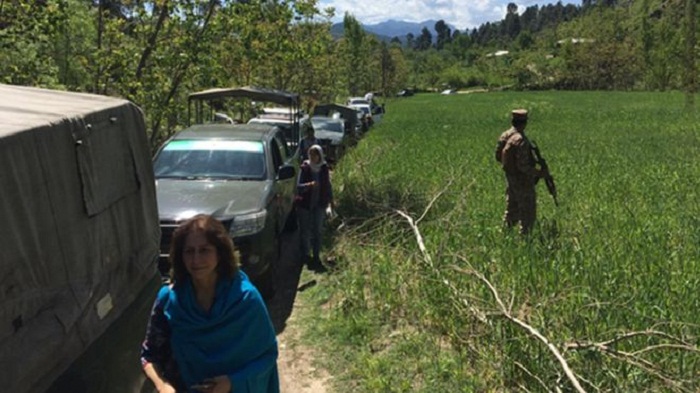 They were given access to an Islamic school in Balakot, where Indian media say militants were killed in retaliation for an attack in Kashmir.

The large building appeared to be fully intact and the Pakistani army denied it had been used as a terror camp.

The visit to the school was held on the eve of a general election in India.

Pakistan and India have been engaged in an information war over the Balakot site, where Pakistan says the bombs on 26 February landed in an empty area and hurt no-one.

India insists it killed a large number of Jaish-e-Mohamed group militants and destroyed their camp in retaliation for a suicide attack two weeks earlier in Indian-administered Kashmir, which killed 40 paramilitary police troopers.

That attack was the deadliest against Indian forces in Kashmir in decades and raised fears of a new war between India and Pakistan, which are both nuclear powers.

What were the media shown on Wednesday?

Foreign journalists and diplomats were taken by the Pakistani army on the visit to Balakot in Khyber Pakhtunkhwa state.

They were shown a medium-sized crater which the army said had been made by an Indian air force bomb.

A single house had been slightly damaged by the blast and a man had been injured, the BBC's Usman Zahid reports.

They were then taken to the Taleem ul Quran madrassa, the first such visit by foreign media.

The large hilltop building is said to have capacity for 2,500 children.

Pakistani army spokesman Maj-Gen Asif Ghafoor insisted the madrassa did "no harm" and that Indian allegations that it was a terror training camp had "no truth".

Some 150-200 children could be seen reciting the Koran in a mosque at the school.

However, a teacher and a student interviewed by the BBC said they were all local people and that the madrassa had been shut since the Indian attack.

While the media were allowed to take interviews they were told to keep them short and it was clear that the tour was being restricted.

What does India say?

Contacted by the BBC, India's external affairs ministry said it stood by its statement last month that the "counter-terrorism strike of 26 February" had "achieved the intended objective".

"The fact that media was taken on a conducted tour to the site only after a month and a half after the incident speaks for itself," a ministry official added on Wednesday.

When journalists from Al Jazeera visited the area - but not the madrassa - in February, they saw a sign for the school which listed Jaish-e-Mohamed founder Masood Azhar as its "leader".

The Balakot air strike has played a major role in the election campaign of Indian Prime Minster Narendra Modi who has called on first-time voters to dedicate their ballots to the pilots involved, India Today reports.

Pakistani Prime Minister Imran Khan told the BBC this week that peace with India over Kashmir would be "tremendous" for the wider region.