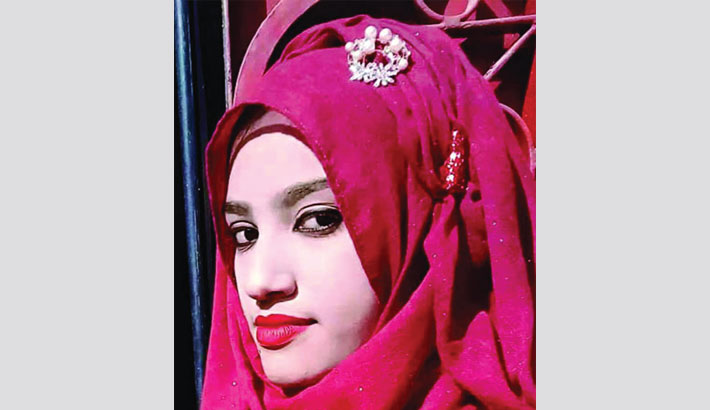 Madrasa girl Nusrat Jahan Rafi, who was set afire in Sonagazi upazila of Feni five days ago, died in a hospital in the capital on Wednesday night.

Rafi was rushed to DMCH where she underwent a surgery on life support on Tuesday.

The operation was conducted after a discussion with physicians from Singapore General Hospital as Rafi was not fit enough to be flown there.

On Monday, the prime minister directed the authorities concerned to send Rafi to Singapore for better treatment.

Ten people, including the madrasa principal, have so far been arrested in connection with the arson attack on the female student.

On Tuesday, police arrested madrasa student Shampa in this connection.

Rafi told her doctors that four students wearing burqas and hand socks set fire to her. She identified one of them as Shampa.

Meanwhile, a Feni court placed the principal on seven days’ remand and two others for five days in a case over the incident.

The two others are Abser Uddin, lecturer of English Department of the madrasa, and student Arif.

Besides, Moazzem Hossain, officer-in-charge of Sonagazi Model Police Station, was withdrawn over the incident.

On Wednesday, the case was transferred to the Police Bureau of Investigation.