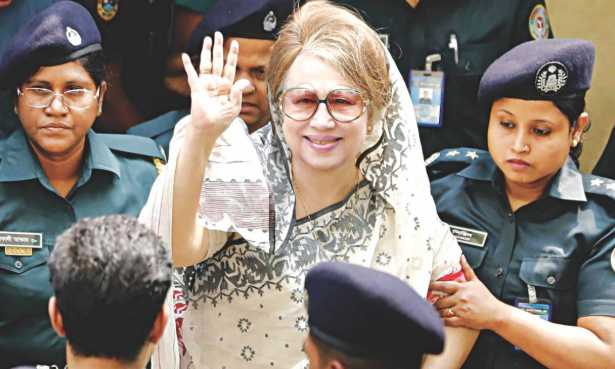 BNP on Wednesday alleged that ruling party leaders and ministers are talking about the release of their chairperson Khaleda Zia on parole with an ‘evil’ motive.

“The government is now talking about our leader’s (Khaleda’s) parole after putting her life at risk. It’s a mockery of the government over her life and treatment,” said BNP senior joint secretary general Ruhul Kabir Rizvi.

Speaking at a press conference at the party’s Nayapaltan central office, he said several ministers and Awami League leaders are relentlessly talking about their chairperson’s release on parole.

“She (Khaleda) will get released on bail through normal legal process. So, there’s an evil motive behind the ruling party leaders’ assertions over her parole. They’re also talking about it as part of their plot,” the BNP leader said.

He urged the government to ensure unconditional release of their ailing chairperson. “Don’t create a smokescreen by talking about parole.”

Otherwise, Rizvi said, their party together with people will take to the streets to have Khaleda freed from jail.

He also accused the government of spreading misleading information through the media about their chairperson’s domestic help Fatema Begum, who has been staying with her in jail.

“Khaleda Zia needs someone to assist her as it’s difficult for her to move and walk independently. That’s why Fatema has been staying with her following a court order. But the government is conducting propaganda through its controlled media over the matter,” Rizvi said.

Though a government-backed electronic media ran false news that Fatema’s family is in trouble as they are not getting her sally regularly, Rizvi said some newspapers presented the right information that Fatema’s mother is receiving the salary every month.

The BNP leader alleged that Fatema’s father was intimidated to tell the electronic media some wrong information about her stay in jail and her salary only to confuse people.