How would nuclear war change humanity? 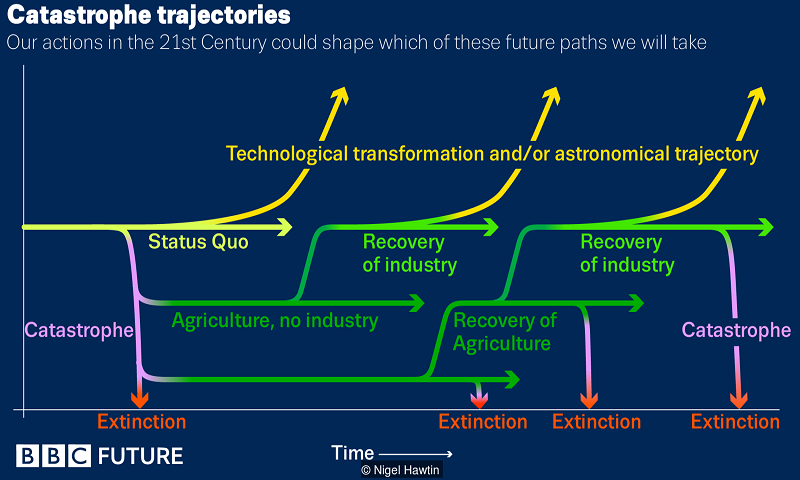 A global disaster such as a nuclear war, a pandemic or runaway AI could have much graver consequences for humanity’s future than we realise, says catastrophic risk expert Seth Baum.

My father’s family came to the US in the 1930s, a Jewish family fleeing Nazi Germany. My life has gone well, and I suppose I should be grateful for the way things turned out. However, I can’t help but wonder what would the world look like today if the Holocaust and World War Two had never happened. All those people who died – would they have living descendants? Would they have lives like mine? Would I be friends or neighbours with some of them? Would I even have been born?

When people think about catastrophes that cause loss of life, they almost always think only of the immediate harm caused. Over 50 million people died in WWII, around 15 million in World War One, and around 160,000 in the 2010 Haiti earthquake. But these figures leave out the long-term effects of catastrophes – the people who never had a chance to live, the ways that our world would be different. These ramifications can be harder to document. But that does not make them less important.

Indeed, if we take a step back and look at the long-term view we can see that certain catastrophes – the largest ones – are among the most important events in the history of the world. The Cretaceous–Paleogene (K-Pg) extinction event 66 million years ago wiped out the dinosaurs and freed up space for little mammals like us. Long before that, the Oxygen Catastrophe of 2.5 billion years ago destroyed most anaerobic life and set the stage for us oxygen-breathers. Had these catastrophes not occurred, humans and many other modern species would likely never have come into existence.

That’s why I and other researchers who study global catastrophic risk believe that avoiding these events should be one of our biggest priorities for the 21st Century.

Human activity has made this era of Earth’s history among the most perilous ever. And if we consider the impact on our species thousands of years hence, avoiding a global catastrophe is not just about preserving people’s lives today – it is about protecting our future, our potential, and the billions of descendants whose paths would be altered forever.

In a sense, humanity’s impact on the planet is like the rapid growth of the organisms that drove the Oxygen Catastrophe. This event was driven by the rise of cyanobacteria, which were the first organisms to use water for photosynthesis. That process splits water into molecular hydrogen and oxygen. The cyanobacteria did that at such a large scale that it made oxygen abundant in the atmosphere, killing off life that couldn’t handle it.

Likewise, humans are the first organisms to harness advanced science, technology, agriculture and industry. We are doing that at such a large scale that we are already killing off many other species. If we are not careful, we could kill ourselves off too.

The list of human-caused catastrophic risks is by now widely familiar: nuclear weapons, global warming and other ecological disruptions, pandemics from pathogens engineered by biotechnology, runaway artificial intelligence, and various other threats. Actually, it’s not really a list but an interconnected network of risks – for example, global warming can destabilise civilisation, making us less able to cope with other catastrophes (more about this later). And these all add to the ongoing risk from natural disasters like asteroids and volcanoes, some combination of which probably killed off the dinosaurs.

For most catastrophe scenarios, the ultimate effect on the human species is hard to predict. There are now 7.6 billion of us spread widely around the world, and we excel at adapting to a range of circumstances. There’s a good chance that at least some of us would survive. But how well any survivors would fare is a great mystery, one which my colleagues and I took on in a recent research paper Long-Term Trajectories of Human Civilisation.

The essence of our paper is to examine what human civilisation (and its direct descendants) could look like millions, billions, or even trillions of years into the future. While the exact form of human civilisation cannot be predicted over such long time scales (or even over shorter time scales), we can make some general conclusions.

If humanity can succeed at avoiding catastrophes, or if we can recover from them, then we may be poised for an incredibly bright future – one enriched by transformative technologies and expansion into outer space. But if we fail, the harm could be permanent. A catastrophe that causes human extinction would of course permanently end our civilisation. However, even if some humans survive, humanity as a whole may never regain the advanced civilisation we have now. Agriculture and industry are especially important capabilities to recover, as illustrated in the graphic below.

To better understand how a catastrophe could shape humanity’s future, let’s consider one example: an all-out nuclear war that involved all of the world’s nuclear-armed countries: China, France, India, Israel, North Korea, Pakistan, Russia, the United Kingdom and the US. Only the most expansive war would manage to draw in all of these countries. A more probable scenario would only involve Russia and the US, which together hold over 90% of the global nuclear arsenal. But for the sake of discussion, let’s consider the worst-case nuclear war.

Even in the worst case, much of the world would presumably be spared from immediate destruction. Africa and Latin America in particular are full of countries that are neither close allies nor adversaries of any of the nuclear-armed countries. Residents of these countries would presumably survive the initial nuclear explosions, as would people who live in the targeted countries but away from the cities and military sites that get bombed.

The survivors’ world would instantly be changed. In addition to the social and political turmoil, they would also lose many important nodes in the global economy. Many global supply chains are designed to be highly efficient under normal conditions but are fragile to even small disruptions – and this disruption would not be small at all. Within weeks or even days, communities all over the world could face shortages of consumer goods, replacement parts for critical industrial infrastructure, and other basics.

Soon after, the global environmental effects would start to kick in. Nuclear explosions are so powerful that they can send the dust and ash from burning cities all the way into the stratosphere, which is the second layer of the atmosphere, located 7km (4 miles) above the surface at the poles and 20km (12 miles) at the equator. The stratosphere is above the clouds, so anything that gets up there doesn’t wash out in the rain. Instead, it spreads around the world within a few months and stays aloft for a few years. While aloft, it blocks incoming sunlight, cooling the surface and reducing precipitation, all of which is bad news for agriculture. (Find out more about how prepared we are for the impact of nuclear war).

The famine from a worst-case nuclear war would kill many people all around the world, possibly more than would die from the war itself. But it might not kill everyone. There are some food stockpiles that could keep some people alive until the skies clear. Additional food could be grown from artificial light or other sources, assuming supplies for that were intact.

The combination of global famine plus the destruction of the war itself would severely strain our modern global civilisation. It is possible that the survivors could keep life as we know it more or less intact. But with all the pressures they face, it would be understandable if our civilisation collapsed, just as previous civilisations from Egypt to Easter Island once did (see “Are we headed for civilisation collapse?”).

What the intersection of famine and destruction following a nuclear war tells us is that catastrophes are often interconnected. The consequences – and vulnerability – a single catastrophe creates can linger from many years after the event. A nuclear war isn’t just a nuclear war: it is also an economic recession and an agriculture failure. How well civilisation endures it may depend a lot on how much it has already been weakened by global warming and other environmental degradation. The effects of the nuclear war could precipitate additional catastrophes, such as a pandemic (due to weakened public health infrastructure) or a catastrophic failure of geoengineering (leading to accelerated climate change). This is a scenario my colleagues and I have called a “double catastrophe”.

Because of all these interconnections, it is important to study catastrophes all together, instead of in isolation. People often ask me which risks are the biggest, but this is the wrong way to look at it. We face an interconnected system of catastrophic risk, not a collection of isolated risks. My colleagues and I have developed the concept of “integrated assessment” of catastrophic risks to study the interconnected risk and develop the best ways of addressing it.

Regardless of what all the catastrophe entails, it raises the question of what happens next. If humanity goes extinct, this question is of course easy to answer: we’re all dead. But if some people survive, the answer is a subtler matter.

If civilisation ceased functioning, survivors would be largely on their own to keep themselves alive and healthy. Today, most people live in urban areas and may struggle to grow their food. (Ask yourself: would you know how to survive without civilisation providing you your basic needs?) Ironically, some of the most well-off people in the post-catastrophe world could be the subsistence farmers who are today considered to be among the world’s poorest. (Read more about what happens, and how people react, in a food crisis).

One critical task would be reproduction. Survivor populations would need to be large enough and close enough together in order to produce new generations of humans. Otherwise, the population would die out. Scientists have proposed that as few as 150 or as many as 40,000 people could be needed to sustain a genetically viable population. The more favourable the conditions, the fewer people are needed, and the more likely a population is to succeed.

A post-catastrophe world would also have some major disadvantages. For example, a lot of the most accessible fossil fuels and other resources have already been extracted and used up. Some industrial pollutants also would persist for many years.

On the upside, cities may endure as dense collections of usable materials like steel. And some energy sources like wind and hydropower would remain available and fairly easy to tap.

Planning for possible future catastrophes may seem rather abstract and removed from the pressing issues that we face today. But it is important to recognise that the actions we take now can affect the course of human civilisation into a distant long-term future. At stake is who will have the chance to live, and what their lives will be like.

To help wrap my mind around this, I find it helpful to imagine the world today if the Holocaust and WWII had been avoided. In that world, there would presumably be many people living good, happy lives – people who do not exist in ours. Of course, we cannot go back in time and change events. But we can change what we do right now to avoid new catastrophes, especially those that could affect the long-term future of human civilisation. For the sake of everyone yet to live, it is vital that we succeed.