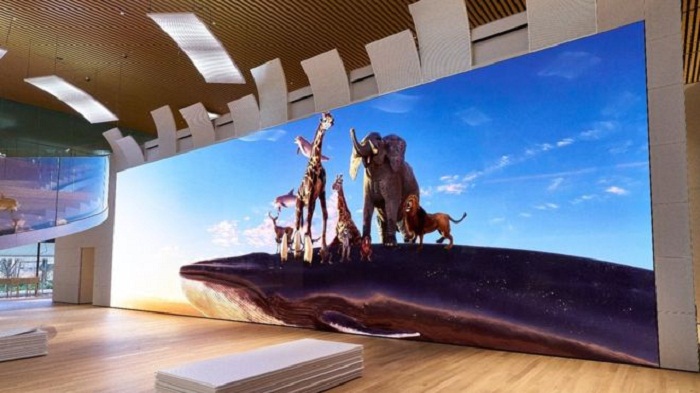 Sony's display contains 16 times as many pixels as a 4K television and 64 times as many as a regular 1080p high definition TV, meaning it can show images in far more detail than normal.

This will let viewers stand close to the unit - which is longer than a bus - without its image looking blurred.

One expert said it would likely take decades for 16K tech to filter down to consumer products.

The 63ft by 17ft (19.2m by 5.4m) screen is currently being installed at a new research centre that has been built for the Japanese cosmetics group Shiseido in the city of Yokohama, south of Tokyo. It is so large it will stretch between the first and second floors.

The development was announced by Sony at the National Association of Broadcasters (NAB) trade show, which is currently being held in Las Vegas.

"We're moving slowly towards 8K TVs at the end of the decade and who knows how long it will take to get beyond that, so 16K is likely to be limited to the corporate world for the time being," commented David Mercer from the consultancy Strategy Analytics.

"But there's no doubt about it. These displays are incredibly impressive in person - even 8K on a big display is almost mesmerising.

"When you get to this resolution it delivers almost a quasi-virtual reality experience as your eyes perceive there to be depth to the content."

Sony had previously designed a separate 16K display that went on show at Tokyo's Haneda Airport in 2014, but that looked like it was made up of dozens of smaller screens rather than presenting a single seamless picture.

The new "super-size" installation has in fact been created out of several modular panels, but because they do not have bezels they can be fitted together without any visible gaps to create the impression of being a single screen.

Sony calls the technology "Crystal LED", which is its brand name for micro-LED display tech. Samsung is also experimenting with the format.

The innovation does not require a backlight, but goes much brighter than OLED (organic light-emitting diode) screens while still delivering similar deep blacks. At present, however, the high manufacturing costs involved make it too expensive for widespread use.

For now, Sony is pitching a range of smaller, lower-resolution Crystal LED displays for use in office lobbies, car showrooms, cinemas and theme parks.

Since little 16K footage exists elsewhere, the firm has produced its own film for Shiseido showing life-size animal wildlife.

It has not disclosed the method involved, but has previously achieved what is known as "quad ultra-high definition" footage by using a method called demosaicing.

This involves applying an algorithm to 8K footage to deduce what the additional pixels should look like, similar to the way 4K TVs sometimes up-sample 1080p footage.