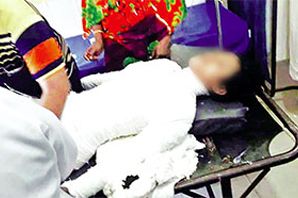 When a woman raises her voice, society tries to pin her down – this is what we find in Rafi's case. She was pressurised to withdraw her case. No outside pressure could sway her mind away. Had she withdrawn all her charges levied on him, the same society would have ostracised her. She would have been ridiculed and called a liar. She would have led a miserable life! The monomaniac Siraj was not someone who would give up something without causing more harm. He was like the blasphemous Barabas in Marlowe’s The Jew of Malta. Barabas enjoys causing harm to others. Sirajs never amend themselves; they are roaming around us!

Siraj ordered his misguided disciples to carry out an all-out attack on Rafi a few days ago. How he could give command from his prison cell---it puzzles my mind! Who were his agents? Surely, the investigating officer will probe into the matter. We hope to find more about it in the coming days. It is not a petty crime. Nothing on earth is as condemning as burning a person alive. It reminds me of Queen Mary. She was called the "Bloody Mary". She was a Catholic queen who was constantly in denial of the existence of Protestant belief. She ordered the burning down of her country’s protestant citizens.

Our country is getting better. If our monitoring system had been stronger, this situation could have been averted. Police could have been a little bit more vigilant over the matter. Had they been stricter, the criminals would not have dared to burn a living person – more surprisingly, as The Daily Sun report suggests, inside an examination centre! What were security guards, teachers and administrators concerned inside the madrassa doing? In women's madrassa, men are not allowed to enter. How do male students enter there in front of others? The matter looks hazy to me.

Men feel superior. They have a superiority complex. It gives them the right to encroach upon a woman's space without her consent. Islam showers us with the message of humanity which these terrorists have not learned despite being students of a religious institution! What they did was not at all Islamic. They should never be pardoned for their acts. The hapless woman, instead of taking proper preparation for her exams, was fighting tooth and nail against her oppressors. Unfortunately, we did not pay any heed to it for a week or so. We did not try to know what ordeals she was going through. Unless a woman is burned down or killed, we don't highlight that news with gravity. It seems, a woman has to be brutally murdered for getting spaces in newspapers.

Now, Rafi is at the centre of attention. Of Rafi's condition, Mohammad Bacchu, in charge, Dhaka Medical College Hospital (DMCH) said, "The condition of the examinee is very critical. Fire burnt 75 per cent of her body. Doctors are trying their best to treat her. It is Almighty Allah who can cure her,” (quoted in The Daily Sun). We should thank the nine concerned doctors working well together to stabilise her condition. But how long the fragile body would endure the burning injuries? – only time will say!

It is not Siraj's first criminal offence. He was accused of sabotaging and attacking police officials in Feni. The Daily Sun has a report that shows he was an ex-member of Bangladesh Jamaat-e-Islami. He was banned from the party in 2016. How could such a criminal remain scot-free from police custody for three and half years? We all know how BNP-Jamaat alliances killed and set people on fire in the third tenure of Prime Minister Sheikh Hasina. In the name of pressing their demands, as has been instructed upon them from their headquarters, the joint alliances took away our liberty of walking freely across the streets and using public transports without any palpable tension. They wanted to grind our lives to a halt. But it is not easy to create fear among us. Life moves on as usual. They wanted a chaotic country. Peace is written on our bodies. Chaos will never be able to cripple us, the people of peace. No party will ever win our hearts if they get involved in massacres, vandalisms and corruptions. If we have a look at the way Siraj orchestrated that scene, readers will find a direct link with his “former party's” extremist activities. Siraj should have been put on trial. He should been kept behind the bars a long time back.

I admire Prime Minister Sheikh Hasina as a person. I will say it for a long time. She is really the mother of humanity. The way she shows her concern towards the victim makes us love and appreciate her as a person. As a prime minister, she has lots of errands to run. Despite all that, she has taken some moments off to reflect on the hapless girl. It shows that some people like her manage to remain humans despite living in the heights of power. I wish, many of her party members would learn these traits from her.

Hasina urged law enforcing agencies to nab the perpetrators immediately. Like a leader of action, she has been taking regular updates on Rafi. She has pledged to give further assistances if required. I would like to laud Feni District Additional Deputy Commissioner (Revenue) PKM Enamul Karim, President, Sonagazi Islamia Senior Fazil Madrassa, who directed the suspension of Siraj from his post. Karim has donated TK. 2 lakhs for Rafi.

Rituparna Ghosh's movie Dahan shows that a woman has to endure twice as much as pressure than a man does when she speaks for justice. At the same time, when a woman is victimised, we try to find faults in her rather than the other way around. If a woman dies while trying to save her husband, she is called a sacrificing animal as if it is her duty. If a man commits the same act, he is a hero; it is called an angelic deed. Unless we really learn how to respect women in all sectors, harassments will continue towards women.

Teachers are guardians. They teach us moral lessons. If a woman is not safe at the hands of a male teacher, where will she go? There should not be any dilly-dally – culprits should be caught. They should be given a fair trial. Here the fair trial will be no other than capital punishment. That will serve as a deterrent to others. Unfortunately, our law is not strong enough to mandate capital punishment for an attempt to murder. After a certain time, the convicts receive a bail. In our world, victims remain victims. When will that be ended?