3 more spans of Padma Bridge to be installed on April 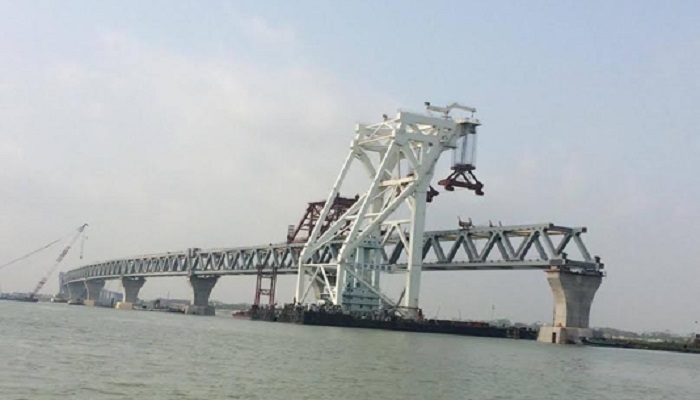 The tenth, eleventh and twelfth spans of the 6.15-kilometre long Padma Bridge would be installed at Jajira point in Shariatpur district on April.

He said with the installation of these three spans, a total of 1,800 meters of the bridge will become visible and of them 150 meters are visible at Mawa point.

The project director said the construction of the 6.15-kilometre Padma Bridge is progressing fast as 66 percent overall work of the project has been completed.

“The overall progress of Padma Multipurpose Bridge Project has reached 66 percent now while 75 percent work of the main bridge has been done so far,” Shafiqul said.

He said the authority has also completed 53 percent of river training work for construction of the bridge.

According to project details, on October 14, 2018, Prime Minister Sheikh Hasina unveiled the name plaque of Padma Bridge Toll Plaza at the Mawa end.

The national economy is expected to witness 1.2 percent GDP growth rate, while 0.84 percent poverty will be reduced every year after completion of the bridge to be built with an estimated cost of Taka 30,193.39 crore.

According to the engineers concerned, a total of 41 spans will be installed on 42 concrete pillars to complete the bridge.