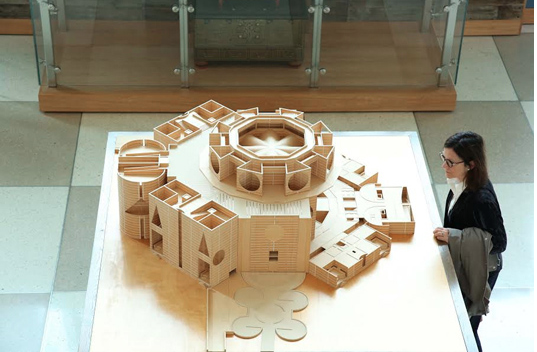 The model of the Jatiya Sangsad (JS) of Bangladesh attracted huge attention of the international community at a photo exhibition at the United Nations (UN) headquarters in New York on Monday.

The exhibition, designed by Arne Maasik, an architect and photographer, showcased the great works of the Estonian-born American architect Louis Kahn.

Speaking at the event, Zahid Ahsan Russel said, “We are today commemorating Louis Kahn, one of the greatest architects of the 20th Century, and the magnum opus of his architectural creations, the National Assembly Building of Bangladesh”.

He added: “It is quite an eclectic effort, also a wonderful example of north-south camaraderie. This has forged an unbreakable bond between Bangladesh and Estonia which we are also celebrating today”.

Remembering the Father of the Nation, architect of independent Bangladesh Bangabandhu Sheikh Mujibur Rahman and the Liberation War, the state minister said that the parliament building is a tribute to the democracy of Bangladesh.

To Bangladeshis, it is more than a parliament house; it is a symbol of stability, dignity and national pride, he said.

Mentioning the parliament building of Bangladesh as one of the masterpieces of Kahn’s work, the President of Estonia said that the monuments built by Louis Kahn are epitomes of Justice, freedom and dignity for which the UN works.