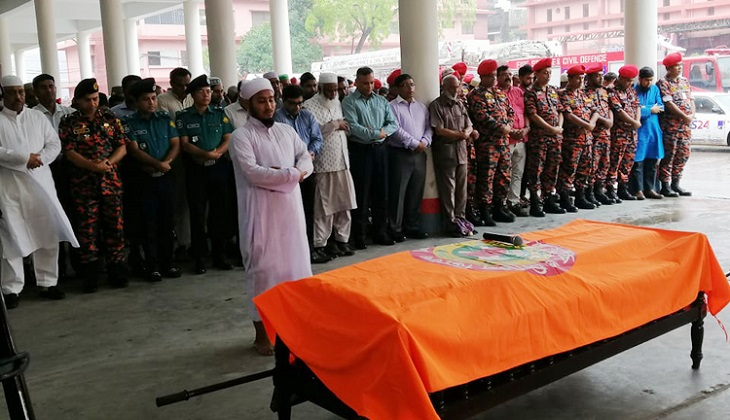 The first namaj-e-janaja of the Banani FR Tower firefighter Sohel Sohel Rana was held at the headquarters of Fire Service and Civil Defence in Fulbaria of the capital at 11:15 am on Tuesday morning.

His colleagues, fire service officials and his younger brother burst into tears during the prayer.

Sohel, who was succumbed to his injuries at a Singapore hospital early Monday, will be buried at his village home in Kishoreganj.

The body of Sohel Rana arrived at Hazrat Shahjalal International Airport around 10:45pm on Monday.

Director General Brig Gen Sazzad Hossain of the fire service received the body with the presence of his family members and top fire service officials.

Sohel Rana, a staff of Kurmitola Fire Service and Civil Defence, sustained serious injuries on March 28 while rescuing people from FR Tower where a deadly fire claimed 27 lives and left many injured.

Rana was shifted to Singapore from the CMH on Friday for better treatment.