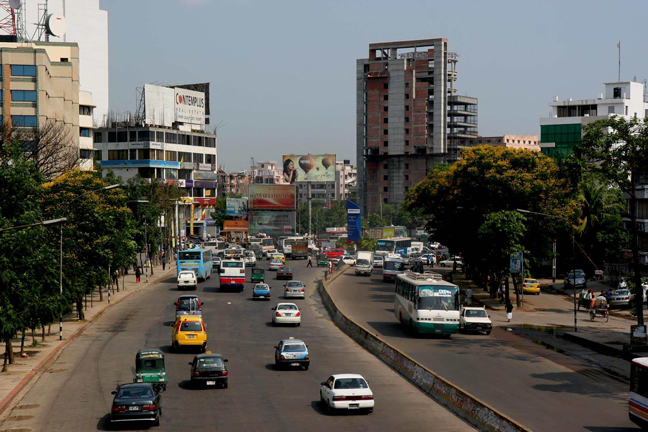 A view of capital Dhaka. Bangladesh should prioritise green GDP

Governance is generally defined as steering rather than rowing the changing processes of policy decisions and actions across the boundaries of the private, public and civic sectors. Increasingly, this concept of governance has been widely employed in policy areas such as service delivery, emergency management, education and environment. Green governance promotes sustainability through both governmental and nongovernmental entrepreneurism as well as through partnerships and collaborations. Green governance is an emerging field, attracting more and more attention from scholars and gradually becoming focus of policy making of governments. However, the development of green governance is often constrained by the unclear definition of responsibilities of various subjects and the desire for capital of countries, enterprises and individuals. As a result, the current practice of green governance is often limited to the spontaneous green production, green management, green supply chain and green administration of a single subject.

Rula Qalyoubi identified a smooth transition to a green governance depends upon seven related conditions which are both necessary and sufficient to produce substantial changes, and which will enable governments to take on a more proactive role in reversing the course of carbon-based activities. These include: political commitment, a legal and regulatory foundation, implementation of financial instruments, technological viability, human capital formation, appropriate institutional setup and a common language.

Bangladesh is one of the countries most at risk from the climate change. However, the government of Bangladesh has made several strides to address climate change. One of the biggest strengths of Bangladesh for addressing climate change is that there is no political difference between the political parties on the issues and urgency to address climate impacts. In 2005, Bangladesh was the first Least Developed Country to prepare the National Adaptation Programme of Action (NAPA) which was eventually revised in 2009, which documented the urgently needed adaptation actions for the country. Moreover, Bangladesh is in the process of initiating the National Adaptation Plan (NAP). In 2009, the Bangladesh Climate Change Strategy and Action Plan (BCCSAP) was developed and published with great international appreciation. BCCSAP has six thematic areas: Food security, social protection, and health, comprehensive disaster management, infrastructure, research and knowledge management, mitigation and low-carbon development and capacity building and institutional strengthening. The government of Bangladesh has rechristened the Ministry of Environment and Forest (MoEF) as the Ministry of Environment, Forest and Climate Change (MoEFCC). The name change is indicative of the strong commitment and the acceptance of climate change as a real challenge in Bangladesh’s progress.

Since 2009 when it unveiled the Climate Change Strategy and Action Plan, the Government of Bangladesh (GoB) has consistently supported policy reforms and investment activities aimed at improving the environment, enhancing climate mitigation and adaptation and improving forest and natural resources management. Bangladesh is at the forefront of international efforts to reduce the negative impacts of climate change and is among the first Fifty five nations to ratify and enable the Paris Agreement to enter into force by the twenty second Conference of the Parties (COP) under the United Nations Framework Convention on Climate Change (UNFCCC) in November 2016. Bangladesh’s Intended Nationally Determined Contributions (INDC), the post-2020 voluntary climate targets which countries committed to in preparation for the Paris Agreement, envisions a significant role for forests in its mitigation efforts as well as in enhancing resilience to the impacts of climate change.

Many NGOs in Bangladesh have made major positive contributions to poverty alleviation and the development of rural and urban communities, and are therefore an important sector for adaptation to climate change. Bangladesh has some of the world’s largest NGOs like BRAC which has nationwide capacity and coverage. Many more local NGOs provide a multitude of services such as micro credit, social mobilisation, health, literacy and education, sanitation, water, agriculture, forestry, fisheries, disaster management, and advisory technical and consultancy services. In recent years a number of networks of NGOs have been established in various sectors.

While Bangladesh has strong environmental and natural resource management policies and regulations, there remains a need for integrating environmental protection and management into national planning and strengthening environmental institutions, especially to respond to the Bangladesh’s rapid urbanisation, industrialisation, and growing pollution. The government should prioritise the growth of green Gross Domestic Product (GDP) instead of GDP measured by the usual methods, and use its budget efficiently in order to invest in green energies, health services, and benefits systems, amongst others. Sustainable development is achievable, however, it is only achievable is everyone is dedicated to achieving it.