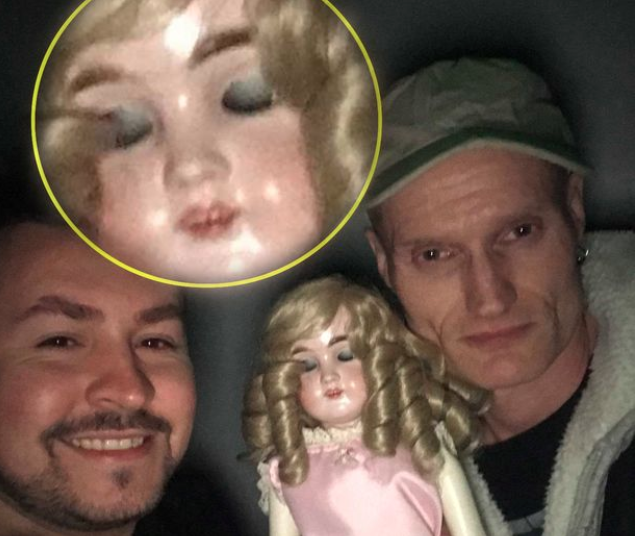 This chilling snap shows a 'haunted' 116-year-old doll appearing to blink in a selfie - despite not having eyes or eyelids.

The unusual activity was detected by two ghost hunters inside an abandoned building, known as 'The Village of the Damned', in Mansfield, Nottinghamshire.

It is claimed that people often feel sick, dizzy and often get headaches in the presence of Janet, as well as hearing footsteps and weird voices.

Paranormal investigators Craig Jones, 28, and Matt Wood, 48, couldn't believe the creepy toy not only appeared have her eyes closed but also had eyeshadow and mascara on.

The ghost hunters were eager to take a shot with the doll, who is called 'Janet' and was originally owned by a Texas family in 1903, after they brought her to the investigation with them.

Craig, a boarding support worker, said: "I love haunted objects and actually being on an investigation with a haunted doll is amazing, which is what made me want to get a picture with her.

"We took a picture with Janet, and as I looked at the picture it looked like her eyes were closed.

"But then I remembered that she doesn't have any eyes or eyelids and just has empty sockets, so I turned my torch on to check, as it was dark and I saw that's she doesn't.

"We were confused and took more photos to try to recreate it, but couldn't. Then other people then tried but also couldn't recreate it either.

"We showed a lot of other people at the event and everyone said that it's 'crazy' and 'very creepy'.

"People also said that it definitely looks like her eyes are closed and it looks like she has eye lashes and make-up on."

Janet came under the supervision of paranormal investigator Miki York, after he was reached out to by a woman called Julie on Twitter begging him to take the doll.

He was told that the doll was given to Julie's grandmother by her grandmother in 1903 and the eerie toy had been haunting people ever since.