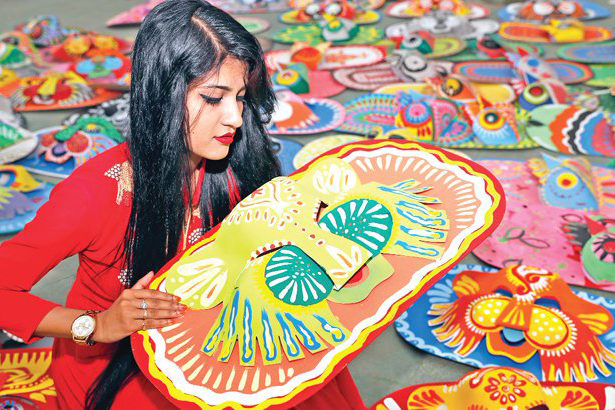 Bangladesh is a land of festivals. There is a popular saying in Bangla ‘Baro Mashe Tero Paban’ meaning 13 festivals in 12 months. It is interesting to note that many of our festivals are linked to religions, seasons and specials occasions. In recent times, international festivals have also been added to the list. However, festivals can be grouped broadly into religious, non religious, indigenous and non indigenous. In recent years, different international day observance like the ‘Valentine Day’ has also turned into some kind of a festival in the country as well. Besides, days of national importance have also gained the status and fervour of important festivals observed by people of all walks of life. The ‘Shahid Dibosh’ on 21 February is not a festival rather a remembrance day is observed throughout the country with due importance and mass participation. The people of Bangladesh believe in and practice different religions. Every religion has its own festivals. Major religious festivals of the Muslims are Eid Ul Fitr and Eid Ul Azha. Hindus of Bangladesh celebrate Durga Puja in a big way though they have other religious festivals that are also observed. The Buddhists major religious festivals include Buddha Purnima, Madhu Purnima, Kathin Chibardan etc. The Christians celebrate Christmas and Easter Sunday with due religious fervour. The Eid ul-Fitr celebrations begin upon the sighting of the new moon which marks the end of the month of fasting. Eid ul-Azha is the festival of sacrifice. All over the world, Muslims sacrifice animals to Allah. Hindu festival Durga Puja is the victory celebration of the Goddess Durga over the evil demon Mahishasura. Christmas is celebrated in memory of Jesus Christ’s birth on the 25th of December. Buddha Purnima, the largest Buddhist festival celebrates the birth of Lord Buddha. Buddhists celebrate it to commemorate three most important events in the life of Buddha- his arrival, enlightenment and ‘nirvana.’ Here it needs to be mentioned that the religious festivals are observed overwhelmingly by the people believing and practicing particular religions. People of other religions are sometimes invited to some events to share the joy of those festivals. But religious festivals are absolutely religion based and particularly observed by the believers of those religions. As mentioned earlier, days of national importance are also observed as festivals by all irrespective of religion. These include the ‘Shahid Dibosh’ (Martyr’s day) of 21st February, Independence and national Day on 26th March and Victory Day on 16th December. The Shahid Dibosh every year is observed throughout the country in remembrance of the martyrs' of Language Movement of 1952. The day is a public holiday. Mourning services begin at midnight at the Shahid Minar with songs that recall the sacrifice of the martyrs. The events of the day include processions, cultural programmes, placing of flowers at the Shahid Minar and prayer at the graves of martyrs'. A few years back, the day has been declared as the International Mother Language Day by the UNESCO. The Independence and also the National Day on March 26 is observed throughout the country. Leaders of the government, political parties and social organisations, freedom fighters and ordinary citizens place floral wreaths at the National Martyrs' Memorial at Savar. Different socio-cultural organisations organise cultural functions across the country. Victory day is celebrated on December 16 to commemorate the victory of the allied forces and subsequent surrender of the Pakistani occupation forces in 1971. The Victory Day is being celebrated since 1972 and is a joyous occasion participated by masses. Media stations broadcast special programmes and patriotic songs. The political parties and socio-economic organisations undertake programmes to mark the day in a befitting manner, including the paying of respects at the Jatiyo Smriti Soudha, the national memorial.

The other types of festivals are categorised as indigenous and non indigenous. Every year, the first day of spring is celebrated as Pohela Falgun. It is mainly celebrated for welcoming the spring season. Pohela Falgun symbolises the festive season of vibrant colours and refreshing flowers. On this occasion, girls get dressed in yellow or orange coloured sarees with flowers in their hair while boys wear colourful traditional dresses including Punjabis. To celebrate the advent of spring the ‘Shakrain’ or kite flying festival is also celebrated in a big way especially in older part of the Dhaka city. It is interesting to see that the clear blue sky gets crowded with kites of different colours and shapes. ‘Pohela Boishakh’ is the first day of the first month of Bengali New Year. On this day, New Year is welcomed with festivities. The festival starts with songs and cultural activities. A colourful procession ‘Mangal Shovajatra’ led by the Art Institute of Dhaka University is the hallmark of the day. On this procession, girls and boys put on colourful dresses to add colour to the festival. Different ethnic communities especially living in hill districts celebrate Biju which is also known as the Baisabi Festival, the New Year celebration. Here it needs to be mentioned that each ethnic community has their own way of celebrating New Year Festival on the first day of Baishakh. The English New Year is observed with associated festivities. In fact, Bangladesh has a long tradition of observing English New Year. In recent years, it is being observed with more vigour and enthusiasm especially in urban areas of the country. In recent time, in line with global tradition, the ‘Valentine Day’, the day of love, is also observed in Bangladesh. The day signifies a time when people show feelings of love, affection and friendship. It falls on February 14 each year and with the passing of every year, it is becoming increasing popular especially among the younger generations. They spend the day with their loved ones and exchange flowers and gifts.

Every year, consumer spending during festivals is on the rise in Bangladesh.  The World Bank estimated its size for Eid Ul Fitr celebration was around US$ 12 billion during the year 2014. The amount may have reached to more than US$ 15 billion in 2018. The sectors involved in this expanding economy are varied and diverse. They include garments and textiles, leather and electronic goods, jewelleries and food items, transportation and communication, tourism and excursions, sports and entertainment etc. The size of the Eid-ul-Azha economy is believed to be around Tk 31,000 crore, of which at least Tk 22,000 crore alone comes from cattle sales. According to one estimate of 1915, the size of the Durga Puja economy was Tk. 20 billion. Every year it is also on the rise. According to a report, the Fashion Entrepreneurs Association of Bangladesh had set their sales target at Tk. 17 billion in 2017 for Pahela Baishak celebration. The said estimate did not include sales of other commodities including, foods, handicraft, electronic items, furniture and services like tourism and cultural events, during this festival. Analysts and businesses credited the rising purchasing power of the people for the growing spending, which, according to them is contributing significantly to the socio-economic development of the country. In the same manner, other festivals are also contributing to the economy of the country.

It is evident that other than the religious festivals all others are universal and inclusive in nature meaning these festivals have common appeal and include all the citizens of the country. Universalism serves as a mechanism or tool for national integration. Citizens with diverse religious and ethnic background find common grounds to celebrate these festivals. All can relate themselves with the essence of the universal festivals. The process helps in developing bondage, tolerance, fellow feeling, common identity among the citizens, internationalism and finally fosters the market forces that accelerate especially the economic growth. It is perceived that with sustained economic growth and increased globalization, the festivals, both religious and universal, in Bangladesh will be going to be observed with more fervour, fanfare and enthusiasm. With time, more and more international day observance having universal appeals will turn into festivals. The market forces at home and abroad will also promote this phenomenon to increase manifold the consumer spending.