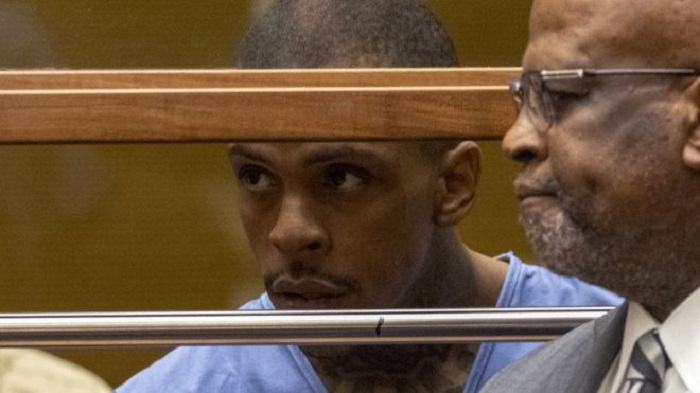 Eric Holder spoke only to acknowledge his rights - attorney Chris Darden, who was one of the prosecutors during the OJ Simpson trial, entered the not guilty pleas.

Holder faces a maximum sentence of life in prison if convicted.

Nipsey Hussle, whose real name was Ermias Asghedom, was shot multiple times outside a clothing shop he owned in LA last Sunday.

Two other people were injured.

Police say the killing was motivated by a personal dispute between the two men, who they say had a verbal altercation.

Los Angeles Police Chief Michael Moore said at one point the suspect left before coming back with a gun and opening fire.

Eric Holder is an aspiring rapper and a suspected gang member, who according to the Los Angeles Times has a previous conviction for carrying a loaded gun.

Nipsey Hussle grew up in south LA and was a member of the Rollin' 60s gang as a teenager.

He's been remembered since his death as someone who promoted constructive projects in the neighbourhood he grew up in.

Celebrities including Rihanna and Drake posted tributes to the 33-year-old, and girlfriend Lauren London says she's "completely lost" without her best friend.

Conspiracy theories have been spreading on social media since Nipsey was killed, with baseless claims that he was killed by one or more of the government, pharmaceutical companies or the Illuminati.

On the day he died, Nipsey tweeted saying "having strong enemies is a blessing".