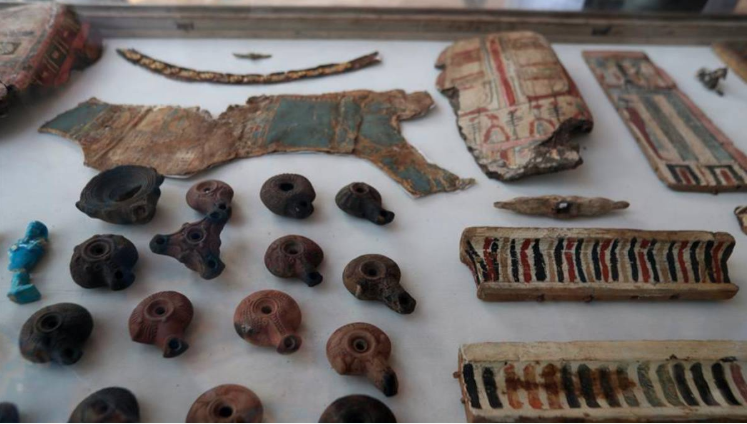 The Egyptian Minister of Antiquities announced on Friday the discovery of a tomb, dating back to the Ptolemaic era which spans from 305 BC to 30 BC, in Sohag province south of the capital Cairo.

"The perfectly well-decorated tomb belongs to a nobleman called Toutou and his wife, a musician who played castanets," Khaled al-Anany said in a press conference.

Egyptian archeologists found a very-well preserved mummy for the wife and more than 300 objects and fragments including 50 mummified falcons, eagles, cats, dogs and rats in the tomb, Secretary-General of the Supreme Council of Antiquities Mostafa Waziri told Xinhua, describing the tomb as "one of the most exciting discoveries ever in the area."

"A large number of mummified shrews, which look like very small mice but with longer nose, were found in perfect conditions of preservation inside the more than 2,000-year-old tomb," Waziri added.

He pointed out that ancient Egyptians believed small rats which run very fast and see very well at night resemble Horus, a god of the sky who could work efficiently in the dark.

Egyptians at that time worshiped those kind of rats because they believed these small creatures can cure blindness, he added.

The hall in front of the sarcophagi is divided into two parts, containing paints for Toutou as presenting gifts to gods and goddesses while his wife recites some verses of the book of resurrection, he explained.

The tomb was accidentally discovered in 2018 when the Tourism and Antiquities Police arrested a gang who were carrying out illegal excavations in an area near the archeological site.