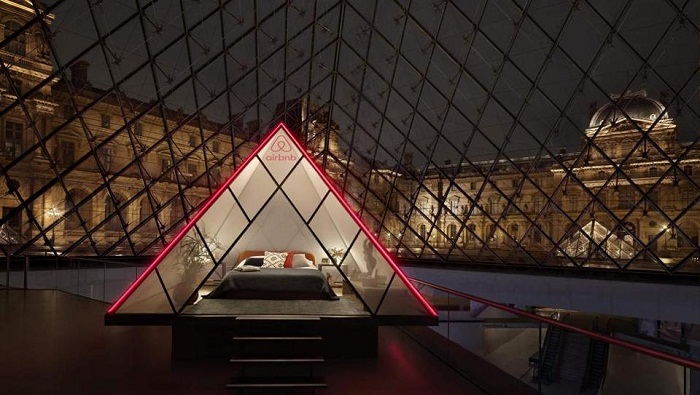 Imagine waking up to Mona Lisa smile one special morning. All the art you love surrounds you while you go to sleep inside the magnificent Louvre Museum in Paris this summer.

On April 30 this year, Airbnb and the Louvre are giving a once-in-a-lifetime opportunity to experience the world’s most magical museum as an insider, when the lights go out.

As the sun sets on Paris, the winner chosen via a contest on Airbnb’s website will make their way to the museum where they will be greeted by an art historian, who will take them on a bespoke tour, like those previously curated for President Obama’s, Beyoncé and Jay-Z.

The Louvre’s iconic glass Pyramid will be specially designed to celebrate the building’s 30th anniversary. From enjoying aperitifs in Mona Lisa’s presence, to relaxing on a sumptuous Parisian lounge sofa, to listening to the atmospheric sounds of French music on vinyl records, to watching the Venus of Milo, the Greek goddess of love and beauty, play host to a lavish dinner, the evening comes to an end with an intimate acoustic concert in Napoleon III’s lavish apartments.

After a day of art, culture, history at the Louvre, the winners then get set to retire for what could be termed as a masterpiece of a sleepover.

The Louvre opened during the French Revolution in 1793, intended to provide inspiration for contemporary art. Courbet, Picasso, Dalí and so many others came to its hallowed halls to admire the old masters, get inspired, immerse themselves in masterpieces and improve and fuel their own art.

As an ancient royal residence, the Louvre is inextricably linked to eight centuries of French history. As a universal museum, its collections, among the best in the world, span many millennia and miles, from the Americas to Asia.

Over 35,000 artworks are grouped into eight curatorial departments, including universally-admired works such as the Mona Lisa, the Winged Victory of Samothrace and the Venus de Milo. With 10.2 million guests in 2018, the Louvre is the most visited museum in the world.