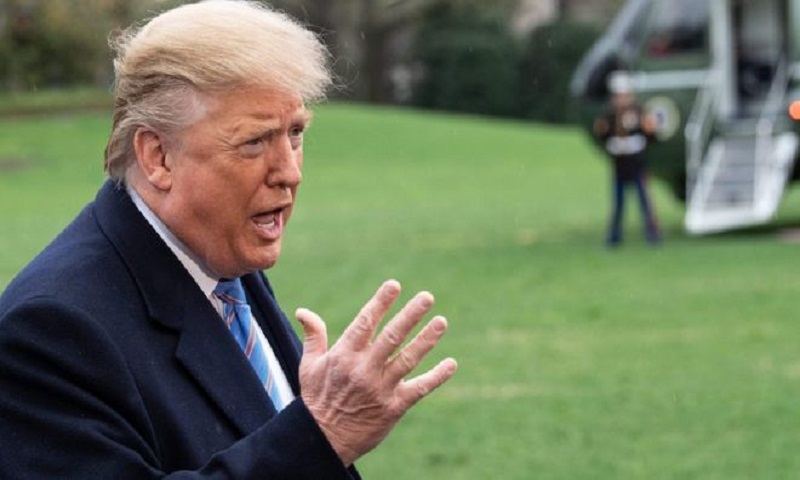 Donald Trump has stepped up his attacks on the US Federal Reserve by calling for the central bank to cut interest rates.

The US President claimed that the Fed has "really slowed us down" in terms of economic growth, adding that "there's no inflation".

Mr Trump made the comments as data showed a sharp rebound in new jobs growth during March.

Mr Trump said: "I think they should drop rates and get rid of quantitative tightening. You would see a rocket ship."

The Fed has raised interest rates four times since Jerome Powell took over as chairman in February last year.

Mr Powell was appointed by Mr Trump but the president has frequently criticised the Fed chairman for increasing rates.

The Wall Street Journal reported earlier this week that Mr Trump told Mr Powell in a recent phone call: "I guess I'm stuck with you."

The Fed had been forecast to raise interest rates a further two times this year. However, it has since said it is now taking a "patient approach" to interest rates.

Last month, it indicated that it did not expect to raise interest rates for the rest of 2019 amid slower economic growth.

Mr Trump said earlier this week that he would nominate the former boss of Godfather's Pizza to the Fed's board of governors.

Herman Cain, 73, ran to be the Republican presidential nominee in 2012 and is a former chairman of the Federal Reserve Bank of Kansas City.

Along with Mr Cain, Mr Trump also intends to nominate Stephen Moore, who advised the president during his election campaign, to join the Fed's board of governors.

While new jobs figures for March beat forecasts - analysts had been expecting growth of between 170,000 and 180,000 roles - earnings data showed that the annual rate of wage increases slowed to 3.2% in March, down from 3.4% in February.

Ian Shepherdson, chief economist at Pantheon Macroeconomics, said: "Overall, these data won't change anyone's mind about whether the Fed ultimately will have to hike this year.

"The payroll gain is welcome but one month does not prove that the trend remains close to 200,000, and doves will point to the modest average hourly earnings gain as evidence that the Fed's 'patient' stance is justified."

Win Thin, global head of currency strategy at Brown Brothers Harriman, said it was a "mixed report" with highlights including an upwards revision to the 20,000 new jobs initially reported in February.

But he said: "The average hourly earnings was a big disappointment."

The unemployment rate remained at 3.8% for a second month.

The healthcare sector saw jobs rise, but the retail and manufacturing sectors both saw declines.

Some 6,000 jobs were lost in manufacturing, the first decline in the sector since July 2017.

Car companies have been cutting thousands of jobs, including General Motors which is cutting about 14,000 workers.