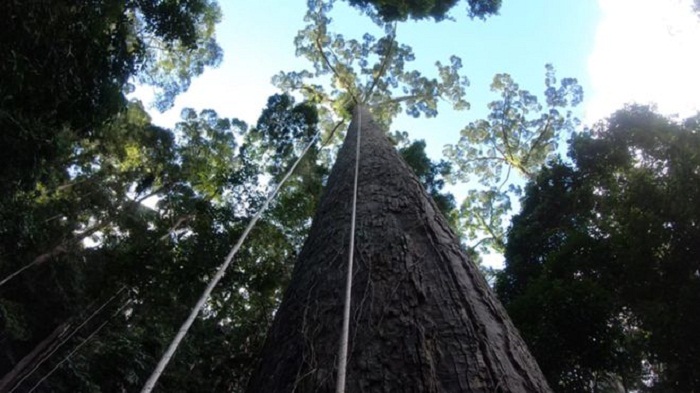 The lofty yellow meranti was spotted in a Borneo rainforest by a team from the University of Nottingham last year.

Researchers from the University of Oxford then carried out 3D scans and drone flights to confirm the record.

The tree, found in the Danum Valley Conservation Area in Sabah, has been named Menara, which is Malay for tower.

Local climber Unding Jami, who scaled the tree with a measuring tape, said it was a "scary and windy" ascent.

"But honestly the view from the top was incredible. I don't know what to say other than it was very, very, very amazing," he added.

Dr Doreen Boyd, from the University of Nottingham, said the find was key because "it's the science telling us these trees do exist, they are reaching heights we have perhaps never anticipated and there will be other tall trees out there that haven't been discovered yet".

"It tells us that we do need to protect these trees," she said.

Dr Alexander Shenkin, from the University of Oxford, said after hearing about Nottingham's discovery, they made the "gruelling" three-hour trek to Menara.

He said: "I've seen what I thought were lots of tall trees, but when I walked up to this giant, your head just keeps going up and up as you look to the top.