'No role' for climate in Halley iceberg splitting 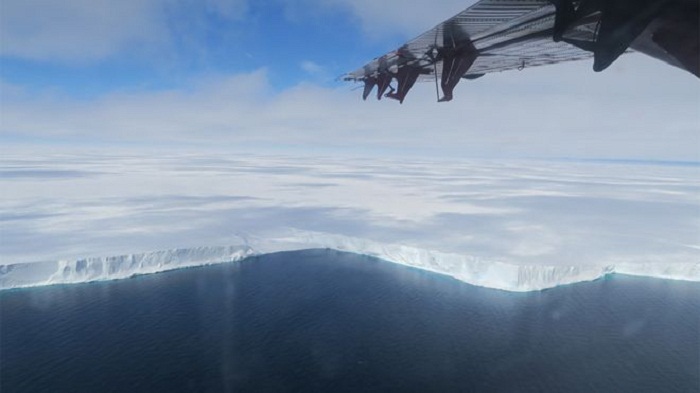 Scientists Jan De Rydt and Hilmar Gudmundsson have spent years studying the area and say the calving will be the result of natural processes only.

The Antarctic station, which sits on a floating platform of ice, was moved in 2017 to get it away from a large chasm.

That crack is now expected to dump a berg the size of Greater London into the Weddell Sea.

It's not clear precisely when this will happen, but the breakaway looks imminent, prompting the British Antarctic Survey (BAS) to withdraw its staff from Halley as a precaution.

As soon as the calving does occur, though, it can be guaranteed that one of the first questions everyone will ask is: what was the influence of climate change?

And the Northumbria University team believes it will be able to answer with high confidence: "There was none."

Jan De Rydt and Hilmar Gudmundsson have built a model to describe the behaviour of the floating ice platform, which is known as the Brunt Ice Shelf.

The Brunt is essentially an amalgam of glacier ice that's flowed off land and pushed out to sea at a rate of about 400m per year.

Incorporating satellite and surface-gathered data, the team's model reveals how stress is distributed across the 150-250m-thick structure. And it predicts accurately where cracks are likely to develop and the path they will take.

"It all fits together; it's a very compelling piece of work," says Prof Gudmundsson.

The Brunt has never been in quite so advanced a position. The famous explorer Sir Ernest Shackleton mapped its ice front in 1915 and the modern cliff edge is well beyond what he saw. A calving seems overdue.

The chasm is not the only major split in the Brunt, however. To the east of Halley is a crack dubbed Halloween, after its discovery on 31 October 2016. This fissure is likely to produce its own berg at some point, but, again, this behaviour can be described simply by the developing stresses in the shelf.

"There is no indication from oceanographic or atmospheric data that the climate is changing in the Brunt area," Dr De Rydt told BBC News.

"Our ocean observations are limited but whatever we have doesn't indicate anything unusual; and our model shows that what we are seeing can be perfectly explained by natural changes in the geometry of the ice shelf."

The Northumbria pair was previously employed at BAS and it was their work that informed the survey's decision to move Halley and the choice of where to put it - 23km upstream of the chasm. Had the base not been shifted, it would now be in a very precarious position.

It was forward-thinking that now looks very smart.

BAS has once more ordered the base be closed for the period from March to November.

There's some uncertainty over how exactly the shelf will react in a large calving event, and the survey doesn't want to be mounting rescue missions in the darkness of a polar winter. This would be extremely hazardous.

With no-one on the ice surface, notice of any breakaway will have to come from automated in-situ instrumentation and from spacecraft observations.

The EU's Sentinel-1 radar satellites pass overhead every few days and their precision measurements can discern not only the propagation of cracks, but also the subtle deformation in the ice as it moves.

This remote-sensing data is processed by the ENVEO (Environmental Earth Observation) company, in Innsbruck, Austria; and ENVEO staff are co-authors on a new paper with the Northumbria team that is under review in The Cryosphere journal.

Although the model has skilfully forecast the actions of cracks on the Brunt Ice Shelf, what it can't do is predict the actual date for a calving event.

The chasm shaping the 1,500-sq-km would-be iceberg has maybe 3-4km to go before it cuts completely through the Brunt shelf. This last thread could go tomorrow, or it may hang on for months.

"In this particular case, extrapolation may be the simplest way to think about it," said Prof Gudmundsson.

"The chasm's been growing at about 1-2km a year and we haven't really seen any slow-down in winter. It's almost through already, but I would say it should happen within a year."