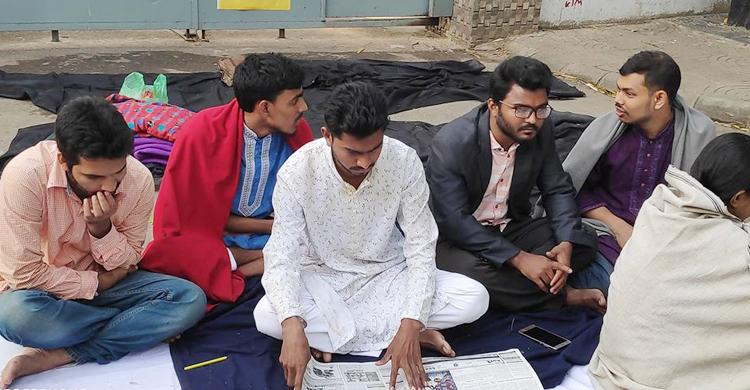 Duscu Vice President Nurul Haq Nur met Dhaka University Vice-Chancellor Prof Md Akhtaruzzaman at his office on Wednesday morning after staging around 14 hours sit-in outside VC’s house in protest against an attack on him and his supporters by Bangladesh Chhatra League workers at the Salimullah Muslim Hall.

Earlier, Nur and a group of students have gathered outside the DU VC’s residence  on Tuesday night and demanded expulsion of the attackers from the university, drives to free the halls from BCL’s control and outsiders, and arrangement of seats for regular students.

Nur vowed not to end the sit-in until the authorities accept their demands.

DUCSU Social Services Secretary Akhtar Hossain Khan, who was elected from Nur’s panel, and Arani Semonti Khan, who contested for the VP post from a panel of independents, were also there at the sit-in.

Nur and his associates started the protest programme around 7:30pm after they came under attack at the SM Hall while protesting against the assault of a student, Farid Hasan, by BCL activists.

Farid contested in the DUCSU elections last month for the general secretary of the SM Hall union as an independent candidate but later pulled out following threats of the BCL leaders.

He needed 32 stitches to the wounds on his head after Monday’s assault.

BCL workers threw eggs at Nur when he and over 100 of his supporters went to the hall in procession on Tuesday afternoon to submit a written complaint over the assault.

A student named ‘Ataullah’ was ‘severely’ injured in the attack, he said.