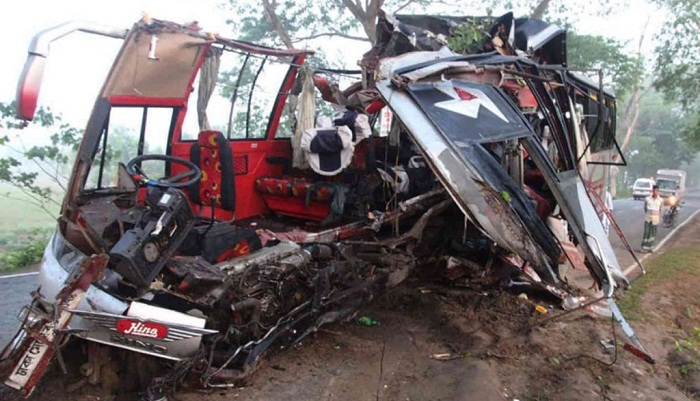 The fatal accidents took place on various highways, national, inter-district and regional roads between January 1 and March 31 across the country.

The National Committee to Protect Shipping, Roads and Railways (NCPSRR), a non-government organisation, on Tuesday revealed the information in its regular monthly survey and observation report.

The report was prepared on the basis of 22 national dailies, 10 regional newspapers and eight online news portals and news agencies.

According to the report, 411 people, including 53 women and 71 children, lost lives and 725 others received injuries in 383 accidents in January. Some 401 accidents occurred in February where 415 people were killed while 884 others injured. Among the deceased, 58 were women and 62 children.

The reasons are: Racing tendency among drivers and reckless driving, contractual leasing of vehicles to drivers or conductors on daily basis, employing drivers without having any licence, lack of awareness of pedestrians and small vehicle drivers, especially motorcyclists, overloading and overtaking tendency of drivers violating traffic rules.

Besides, long-time driving without any interval, lack of implementation of law to stop plying of unfit vehicles, violation of traffic rules on long routes, increase in motorcycles and three-wheelers on roads and highways, and  carrying passengers and goods in locally-made motorised vehicles.