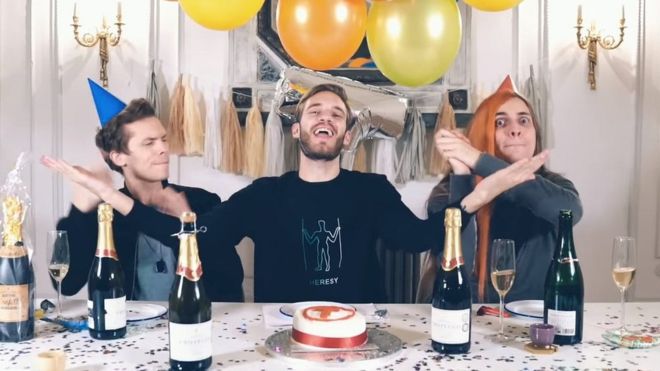 Swedish gamer and video-maker PewDiePie has lost his crown as the YouTube star with the most subscribers.

He is now in second place, behind Indian channel T-Series.

PewDiePie, real name Felix Kjellberg, had been battling T-Series to retain the top spot for several months. On Sunday, he posted a video congratulating his rival.

He also threw some shade at the Bollywood-themed channel. "All it took was a massive corporate entity with every song in Bollywood," he sings in the video, referring to his defeat.

On Monday, T-Series was about 15,500 subscribers ahead of PewDiePie, who has more than 92 million subscribers.

In recent months, PewDiePie's supporters had carried out a number of promotional efforts on his behalf.

T-Series owner Bhushan Kumar recently told BBC News that he did not view his channel as being in competition with Mr Kjellberg's .

"I am really not bothered about this race. I don't even know why PewDiePie is taking this so seriously," he told India correspondent Soutiq Biswas.

"I have not told my artists to put up supportive messages to boost our followers on our channel. We are not in that game."

T-Series was started by Kumar's father as a production company in 1983. The company recorded devotional music and sold the tracks on cassette. It put its first video on YouTube in 2011.

Kjellberg launched PewDiePie eight years ago and went on to become the world's highest-paid YouTuber.

Despite his success, the most subscribed-to channel on YouTube remains one of the platform's own. Its music videos channel has more than 105 million followers.