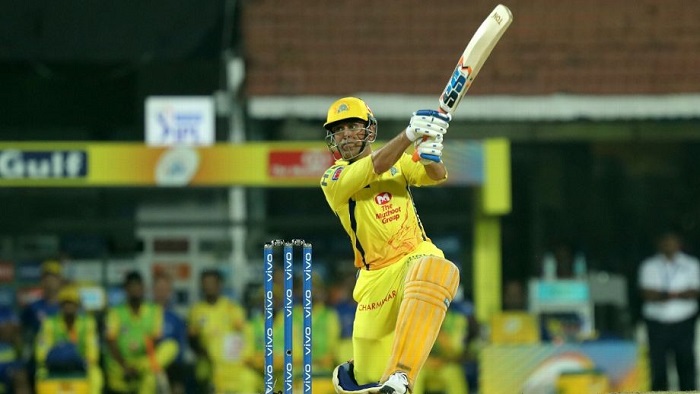 A vintage MS Dhoni innings - one that ended with three sixes off the last three balls - tipped Chennai Super Kings from par score to winning score as they staged a comeback to beat Rajasthan Royals by eight runs in Chennai.

A part of Dhoni's unbeaten 75 off 46, his highest score at home, was built in partnership with Suresh Raina with the pair joining at 27 for 3 after Ajinkya Rahane had put them in.

But it was at the end that Dhoni turned it. With Dwayne Bravo, who would later defend 12 off the last over, Dhoni put on 56 in 29 balls as Royals conceded a match-defining 67 off the last four overs.

Ben Stokes, Rahul Tripathi, and Jofra Archer played crucial knocks, but Royals' own collapse at the start of the chase meant they had too much to do at the end.

Super Kings got only one of the first two overs. Jofra Archer had hit Ambati Rayudu on the forearm before closing the wicket-maiden off by having him fend one to the keeper. Short of a length fast bowling still seemed the optimal strategy and Shane Watson was cognizant of this, getting boundaries off Dhawal Kulkarni and Ben Stokes on the back foot. His indulgence was short-lived though. Having just pulled Stokes for six, he guided an upper-cut straight to short third man two balls later. Kedar Jadhav also perished in an attacking haze shortly afterwards - two pull shots for fours off Stokes, out third ball throwing his hands at a wide ball from Kulkarni.

At 27 for 3, Royals had Suresh Raina and MS Dhoni to bowl at in the last over of the Powerplay, and Super Kings' senior-most batsmen looked vulnerable. The length of attack remained the same, Archer attacking Raina's ribs with a leg gully and getting him hopping and fending. When Dhoni took strike, his back foot defence rolled back onto the stumps, only for the bails to remain in place. Then, things got easy.

Royals hand it back

Royals chose to save Kulkarni's remaining over for the slog, meaning the pressure was immediately relieved with five straight overs of spin. Shreyas Gopal and K Gowtham were reasonably economical to start off, but Raina grew increasingly more confident and took them on. When the bowling change came about, it was Jaydev Unadkat and like most teams have done, Super Kings went after him straight away. Dhoni flat-batted a slower ball for his first boundary and Raina tickled one fine later in the over.

But Royals got some openings. In his next over, Unadkat bowled Raina a ball after he'd survived a run-out attempt, and in the next over, Gowtham dropped Dhoni - a difficult chance - at extra cover. The 61-run stand had done enough to put Royals on the defensive and with a well-set Dhoni surviving that chance, Super Kings looked set for a big launch.

Kulkarni returned in the 18th over to a completely different life. All the pressure was on him and dew had begun setting in. He bowled two high full tosses, one wide, one a no-ball, and a low one for the free-hit that Dhoni drilled for six over extra cover. The moisture had damaged the ball, prompting a third change on the evening, but to inaugurate it, Kulkarni was taken for ten in two by Bravo. Twenty-four runs came from that over, whereas he'd conceded 13 in his first three.

On either side of that over, Archer conceded 15 off 12. An under-confident Unadkat was handed the final over and after being hit for six over his head by Jadeja, he was forced to contend with vintage Dhoni for the last three balls of the innings. Each of those was short, each flat-batted in a different direction. And each one a six. Twenty-eight runs came off that over, making it the third most expensive final over in IPL.

For the third game in a row, Deepak Chahar bowled out his four overs up front, and for the second time at less than five an over. On Sunday, he strung two wickets to that economy rate - those of Ajinkya Rahane and Sanju Samson. While sticking mostly to his preferred corridor line and moving it either way, he got assistance from the two-paced pitch and had both of them caught off the thick outside edge. Shardul Thakur capitalised on it as well from the other end and with Jos Buttler's wicket, Royals were 14 for 3 with their top three run-getters all back in the dugout.

No comebacks allowed at Chepauk

Super Kings went with two left-arm spinners against a team that had only one left-handed batsman. But the dew made them ineffective - Ravindra Jadeja and debutant Mitchell Santner went for a combined 49 off their four overs. Incredibly, Imran Tahir still managed to extract turn and was his usual menacing presence in the middle overs. His 2-23 in four had cut short a dangerous-looking Rahul Tripathi innings and with Steven Smith's wicket, the door seemed to have shut on Royals' chase at 94 for 5.

But Ben Stokes, getting only his seventh 30-plus score in 27 IPL innings, kept them alive long enough to wait for the seamers late in the innings. When Archer joined him, there was an immediate surge of aggression: from needing 56 off 23 when he came in, Royals brought the equation down to 12 off the last over, a 19-run 18th over from Dwayne Bravo the main catalyst in that.

Archer had hit him for two sixes in that over, but Bravo returned to regular service in the 20th. He got Stokes to chip to extra cover first ball, conceded only a leg-bye off the next two, and kept Archer to a single off the fourth ball. In the end, Archer, Royals' best player on the day, was unbeaten on 24 off 11.