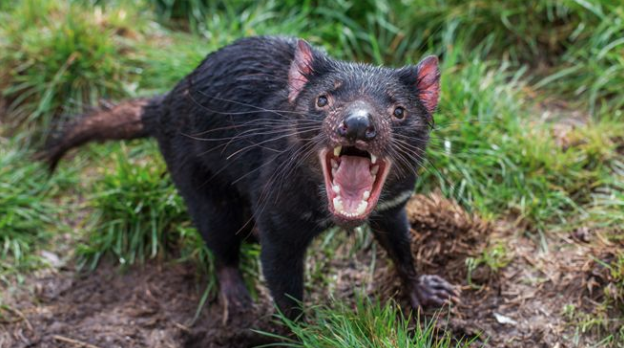 There's fresh hope for the survival of endangered Tasmanian devils after large numbers were killed off by facial tumours.

The world's largest carnivorous marsupials have been battling Devil Facial Tumour Disease (DFTD) for over 20 years. But researchers have found the animals' immune system to be modifying to combat the assault.

And according to an international team of scientists from Australia, UK, US and France, the future for the devils is now looking brighter. "In the past, we were managing devil populations to avoid extinction. Now, we are progressively moving to an adaptive management strategy, enhancing those selective adaptations for the evolution of devil/DFTD coexistence," explains Dr Rodrigo Hamede, from the University of Tasmania.

First discovered in north-eastern Tasmania in 1996, the disease has since spread across 95% of the species' range, with local population losses of over 90%.

Dr Hamede's team has been collecting epidemiological evidence over the past 10 years. The group has plotted scenarios based on current infection rates in the wild, and in their forecast for the next 100 years, 57% of scenarios see DFTD fading out and 22% predict coexistence.

The disease is transmitted when devils bite each other's faces during fights. The biting behaviour is a way to socialise and assert dominance which, alongside the growl-like screams, helped earn the devils their nickname. "Our current hypothesis is that the biting doesn't only lead to the spread of tumours but it might be the starting point," explains Max Stammnitz, from the University of Cambridge, UK, who sequences tumour genomes.

"If the scarring processes for the recurring wounds are interrupted by a mutation, this might become cancerous. It fails to heal and starts to grow out into an external tissue that may then become transmissible," Mr Stammnitz says. After the bite, a solid tumour then grows around the face or neck, with the power to break bones in the jaw - killing the animal after 6 to 24 months.

But in the last 5-6 years, some devils have developed higher tolerance to infection and even resistance without human intervention, meaning that while population numbers have not recovered to pre-DFTD numbers, the decline has at least now levelled out.

"Natural selection is trying to fix the problem on its own by favouring those who can survive the tumour, so we're more hopeful these days than ever before," explains Dr Hamede.

The international team monitors eight sites across the east, south and west of the island every three months, observing multiple generations of devils. "We have witnessed how these tumours shape the ecology of devils and how they have been evolving with their hosts in real time," Dr Hamede says.

Devils can now adapt to the transmissible cancer at the genetic and phenotypic levels - meaning the DNA and characteristics of the gene traits. This is due to their phenotypic plasticity - the capacity of an individual organism to alter its physiology or gene expression in response to changing environmental conditions. And what's even more unique is how rapidly this has happened - in a matter of 16 years, over just eight devil generations.

"It's a constant arms race of adaptation between animals and diseases. We develop mechanisms of resistance which put pressure on pathogens to improve infection," Mr Stammnitz says. The first of these mechanisms is tolerance and the second is resistance. The team has found devils that have lived for up to two years with the disease, allowing for two more litters to serve as population recruitment for the disease.

In addition, 23 cases of tumour regression have been found so far - showing devils also have the capacity to fight and recover from DFTD.