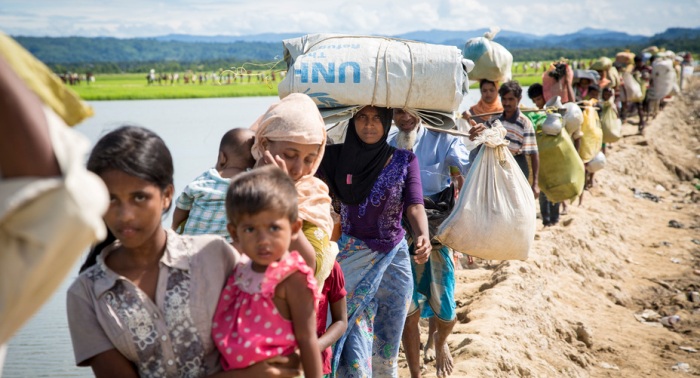 Bangladesh has sought UK’s strong and unremitting support to ensure the Rohingyas’ safe return to their homeland.

“We would like to see UK’s sustained diplomatic leadership in the UN, Geneva and the Security Council for the safe and sustainable return of Rohingyas to Myanmar,” State Minister for Foreign Affairs Shahriar Alam said at the 49th Bangladesh Independence and National Day Reception in London on Wednesday.

More than 700,000 Rohingyas fled to Bangladesh since late August 2017 after the Myanmar military launched a brutal offensive against the mainly-Muslim ethnic minority. The UN described the crackdown as “textbook example of ethnic cleansing”.

The sheer speed and scale of the influx made it the world’s fastest growing refugee crisis. Bangladesh is currently hosting more than a million Rohingyas, many of them came to Bangladesh over the years to flee persecution in Myanmar.

State-sponsored discrimination against Rohingyas stretches back decades in Myanmar which calls them ‘Bangalis’ to imply that they are illegal immigrants from Bangladesh. Many Rohingyas are forced to live in squalid camps in apartheid-like condition.

Alam thanked the British MPs, the people and the media for raising their voices for Rohingyas and urged them to keep it up until they return to Myanmar in dignity and rights, said a press release on Friday.

Bangladesh and Myanmar have signed a repatriation deal but no apparent progress has been made yet.

The Bangladesh High Commission organised the reception at the International Maritime Organisation (IOM).

Deputy Leader of the House of Lords and Minister of State for Defence Earl Howe, Commonwealth Secretary General Patricia Scotland, IMO Secretary-General Kitack Lim and a good number of members of House of Lords and baronesses attended the event, among others.

State Minister Alam was in London for a 12-hour transit to Canada via US. He met senior British MPs, held meetings with his counterpart Mark Field and participated in a discussion meeting at the House of Commons on Bangladesh Independence and National Day.

He thanked the UK government, its people and Bangladeshi-British people for their "unforgettable contribution" to the Liberation War. “UK continues to assume a special place in the foreign policy priority of the government of Prime Minister Sheikh Hasina,” he said.

The two countries are looking forward to jointly celebrate 50 years of diplomatic ties.

“Bangladesh will specially look towards re-energising its important strategic, trade, investment and security cooperation with the United Kingdom,” Alam said.

She hoped that the bilateral relations between Bangladesh and UK would reach a new height in the days ahead.