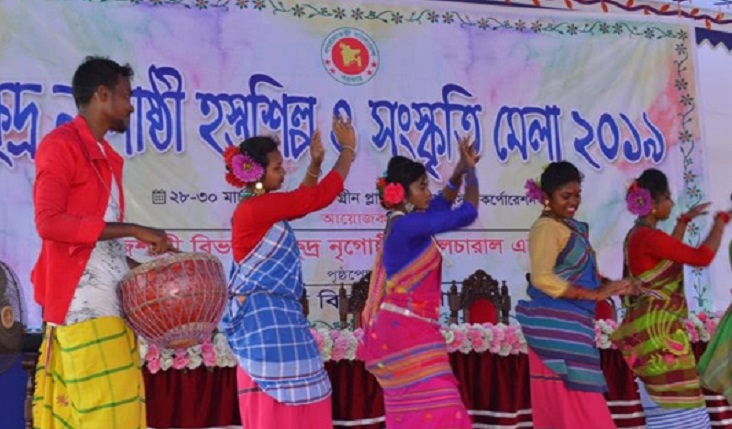 A two-day ethnic minority people handicrafts and cultural festival in Rajshahi is going to be ended today (Friday) amidst various colourful programmes.

Rajshahi Divisional Ethnic Minority Cultural Academy organised the festival at Green Plaza of Rajshahi City Corporation in a bid to promoting of ethnic culture and handicrafts of the plain land.

Addressing the function Nur-Ur-Rahman pointed out the steps taken for protecting the handicrafts and cultural heritages of the ethnic minorities. As part of the efforts, the fair has been arranged, he said.

He said the present government is very cautious to protect the cultural heritage of the plain land ethnic people as their heritage, culture and resource are integral part of the society.

Nur-Ur-Rahman, also the president of the academy, viewed that the country is now being widely regarded as a unique example of communal harmony as people of all religions are living in Bangladesh with equal rights.

A total of seven events including two seminars are supposed to be held in the festival side by side with showcasing traditional musical instruments, dresses, ornaments and other traditional useful items of ethnic peoples.

The opening ceremony was followed by a cultural programme performed by the ethnic minority women and children.

A book on ethnic minority people and their life and cultural heritages was published and a research-based video documentary has been made on the occasion.