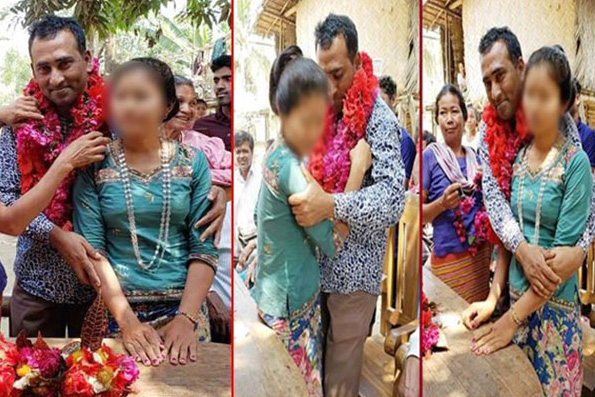 A video clip has lately gone viral on the social media that shows a newly elected Upazila Parishad chairman hugging and cuddling a girl of an ethnic minority group in Bandarban hill district. Most of the social media users who have talked about the issue strongly disapproved of the way Abul Kalam touched the adult girl, who seems to have felt uneasy and got annoyed by the unexpected touch and tried to free her from his hold. Some of them have called the public representative a pervert while some others described it as a case of complete sexual harassment and suggested legal action against him.

But a few people have come up with explanations and arguments to prove the innocence of the Alikadam Upazila Parishad chairman. Some of them have posted or shared many other photos of the chairman similarly hugging other women and girls to give an impression that his touching the minority community girl was nothing exceptional; it is his normal way of behaving with women and that he had no evil in mind. Oh my god, if a public representative touches or hugs women every time he gets a chance or if he always looks for such chances, he must be stopped right now. He is simply abusing his office to satisfy his lust, we must say.

Several local journalists have gone one step ahead to save the chairman’s image; instead of presenting him before the people for an apology or at least for a version from him on the matter, they have brought the girl in the chairman’s defence who reportedly said Abul Kalam is like her ‘brother’ [I guess by the term ‘brother’ she has meant sibling, not cousin].

I am not sure if the girl has spontaneously opened up to the media about the matter and supported what the alleged abuser did. I suspect, and I guess many other people also suspect, influence behind the girl supporting the alleged abuser. What other options a minority community member can have, especially when it comes to dealing with a man who is the chairman of the very Upazila, or sub-district, she lives in, for two consecutive terms before serving as the Union Parishad chairman for another two terms? Anyone can guess what influence such a long-serving public representative can have in his area.

Another group of people are presenting a conspiracy theory claiming that a section is publicising the video clip to exploit the issue in an effort to spark grudge among the ethnic minority community against the Bengali people there. There is no denial of the fact that some quarters are always active in instigating hatred among the hill people against the Bengalis to disturb the co-existence of the two communities, but by propagating the conspiracy theory over the upazila chairman’s act, they are simply nullifying the gravity of the matter and thereby encouraging others having evil in mind to follow him.

The supporters of the chairman are of the opinion that the hug was an act from brotherly feeling. Yes nowadays we see this sort of ‘brotherly’ or ‘fatherly’ hugging or touching in many places around us. ‘Improper touching’ has been a buzzword in the developed world where facing action for such touching is not unusual. But in Bangladesh we hear this phrase very less as we are not yet adequately aware of the matter itself and its impact. Here many girls, and sometimes boys too, experience inappropriate touching, particularly from relations, family friends, colleagues and/or other close people. Undoubtedly it is a form of sexual harassment. But in most of the cases the victims cannot protest as the harassers are usually their seniors or they enjoy higher social status. And if reported, guardians often overlook such incidents. If we, as a society, already started to accept this sort of behaviour as normal, we have to look into what changes our society is going through.

Bangladesh, as a country, is performing tremendously in terms of expansion of education with around 100 per cent of the primary school-age children getting enrolled in educational institutions and a growing number of people accessing higher education. But the standard of our moral education still remains a big question. We are not learning how distance two adult individuals of opposite sexes should maintain, be they friends, colleagues or relatives, excepting for intimate relationship. We are neither honouring our society’s conventional way of conduct; nor are going by the religious guidance; nor are we following the modern society’s teaching i.e. where to stop and going up to what point is acceptable and what point not in dealing with people, particularly those from opposite sexes.

Why do not we consider how torment a girl or a woman undergoes because of the sexual harassment she faces? Numerous local and international case studies have found that improper touching, let alone improper hugging and cuddling or other form of severe sexual harassment, leaves permanent scars on the mind of the victims. As a society, we cannot allow this sort of evil act to continue; we must stand up against it to save the victims or the potential victims and thus save the society.