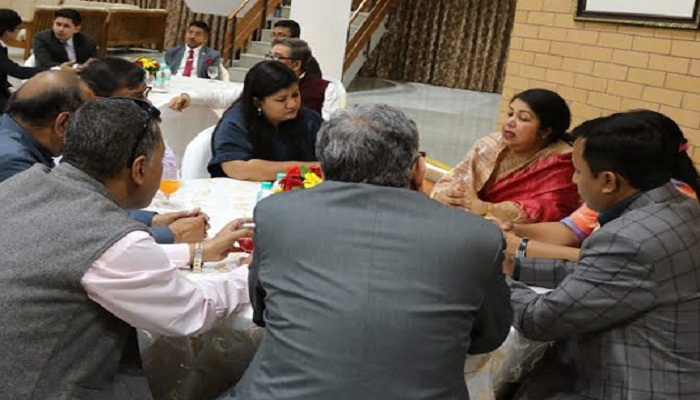 Speaker of Bangladesh Jatiya Sangsad (parliament) Dr. Shirin Sharmin Chaudhury has expressed the hope that the lawmakers elected on BNP tickets in the last general election would join parliament to further strengthen the democratic process.

“We are waiting for them to come and take oath because they have been elected and people have voted for them… we always encourage them through media and any other forms to come to the parliament,” she said.

Her comments came when she was talking to a group of selected Indian journalists and other reporters from home prior to a dinner hosted by the Bangladesh High Commission on its premises last evening.

The speaker, who led a delegation to the Microeconomic Policy and Capacity Building Workshop for Legislators of South Asia organized by IMF from March 26-27, arrived here on March 25 and left for Dhaka this afternoon.

In her nearly 16 minutes of informal discussion with the press, she talked about the last general election, Bangladesh’s development initiatives, existing Indo-Bangla relations, bilateral trade and business and repatriation of Rohingys to Myanmar.

She said the present Awami League government is very open to welcome their BNP colleagues in the house. “If they come, I think they will be given equal opportunity in all respect to participate in house debate,” she added.

Responding to a query, she said she would follow the constitutional provision if the BNP lawmakers do not take oath as members of parliament within the stipulated time.

“There is a constitutional provision… There is certain point of time we need to follow– 90 days from the first sitting of the session. But let us be hopeful that they would come,” she said adding that the 90 days’ period is likely to end on April 30.

About Bangladesh’s general election held in December last, she said the polls were very inclusive since there was tremendous response from the people and the voters as well. “It’s a landmark continuation of functioning of parliamentary democracy in Bangladesh.”

She said the 9th, 10th, 11th parliaments came into being through elections and there was no interruption in between.

The speaker also referred to women’s participation in parliament, formation of all standing committees in the first session of parliament, GDP growth, social and economic indicators and Bangladesh’s graduation to a middle income country.

However, she said 2020 is also a very special time for us because that will mark the birth centenary of Father of Nation Bangabandhu Sheikh Mujibur Rahman.

About Indo-Bangla relations, she said India is not only a good neighbor of Bangladesh but also a very good friend and “we think this friendship would be stronger in the days to come.”

Replying to a question on the unresolved issues between the two countries, she said, “Since India is our good friend, we always believe in discussion, negotiations, dialogue and we feel that through these any issue can be resolved.”

On Rohingya issue, she expressed her disappointment over the Myanmar government’s dilly dally practices in taking back its 1.1 million people to their homeland.

She said no significant progress was made by Myanmar so far in taking back their citizens since Bangladesh signed a number of Memorandums of Understanding (MoUs) with the country in this regard.

“Myanmar has to comply with a lot of terms and conditions and create a congenial and safe environment for the Rohingys for their safe repatriation,” she said adding that Bangladesh is trying to pursue them.