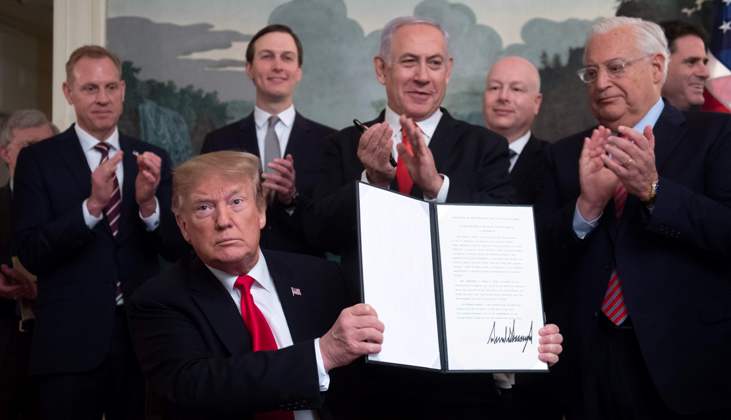 With Prime Minister Benjamin Netanyahu at his side, US President Donald Trump declared Monday that the Golan Heights belongs to Israel -- handing another major diplomatic victory to the premier ahead of tight elections.

Netanyahu spared no praise as he watched Trump sign the Golan proclamation at the White House, likening him to President Harry S Truman, who recognized Israel, and even to Cyrus the Great, the Persian king who freed the Jews of Babylon.

“Your decision to recognize Israel’s sovereignty on the Golan Heights is so historic,” Netanyahu told Trump. The Jewish state captured the territory from Syria during the Six-Day War of 1967.

“Your recognition is a twofold act of historic justice. Israel won the Golan Heights in a just war of self-defense, and the Jewish people’s roots in the Golan go back thousands of years,” he said.

Trump -- who in 2017 took the even more momentous step of recognizing disputed Jerusalem as Israel’s capital -- called the Golan declaration ‘a long time in the making.’

“It should have taken place many decades ago,” said Trump, who had revealed his intentions on the Golan on Thursday in a Twitter message.

Netanyahu, a wily right-winger who this year would become the longest-serving prime minister in Israeli history, is facing an unexpectedly stiff challenge in April 9 elections from centrist Benny Gantz, who also came to Washington for AIPAC.

Netanyahu was visiting Washington for the conference of the American Israel Public Affairs Committee (AIPAC), the pro-Israel US lobby, but cut his visit short after a rocket fired Monday from the Hamas-controlled Gaza Strip hit a house north of Tel Aviv, wounding seven Israelis in an unusually long-range attack.

Just as Netanyahu entered the White House, Israeli warplanes struck targets in Gaza linked to Hamas -- which denied carrying out the attack -- with the prime minister vowing to respond “forcefully to this wanton aggression.”

Trump was isolated in the move, with the United Nations and US allies France and Britain all saying that they still considered the Golan Heights ‘Israeli-occupied’ in line with UN resolutions.

Israel annexed the Golan in 1981 but had won no international support. The territory had long been seen as a comparatively easy problem to resolve, as both Syrian President Bashar al-Assad and the Golan's 20,000 settlers are largely secular in a region dominated by religious feuds.

But changing the strategic dynamics, Syria has been embroiled for years in a devastating civil war in which Iran has made inroads -- to the staunch opposition of Israel, which has vowed to eradicate the clerical regime's presence.

Shortly before the Golan proclamation, Vice President Mike Pence brought the AIPAC audience to its feet as he hailed Trump as ‘the greatest friend of the Jewish people and the state of Israel ever to sit in the Oval Office.’