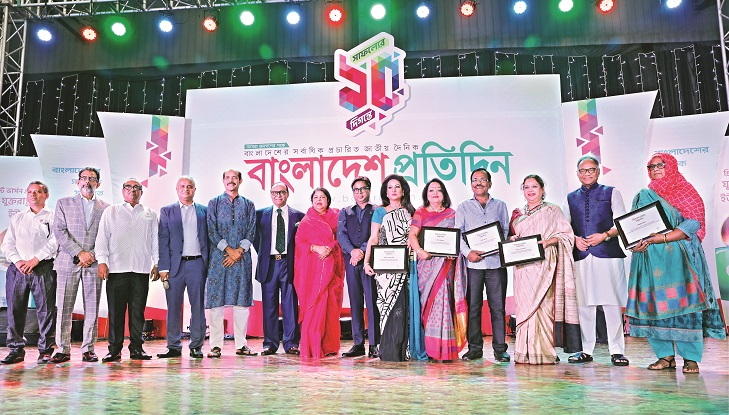 Bangladesh Pratidin, the highest-circulated newspaper in the country, celebrated its ninth founding anniversary amid colorful programmes at International Convention City Bashundhara (ICCB) in the capital on Saturday.

On the occasion, five eminent personalities were honored for their outstanding contributions to their respective fields.

Well-wishers and readers of the daily attended the programmes and shared the joy of the daily’s success in the last nine years.

The presence of a galaxy of personalities, including ministers, politicians, academics, celebrities, businesspersons, media personalities and other members of civil society adorned the event.

Attending the programme as the chief guest Speaker Dr Shirin Sharmin Chaudhury said: “Bangladesh Pratidin reflects the views of all people across the country. The newspaper has won the people's heart by providing authentic news regularly”.

She urged the newsmen to pursue constructive journalism and uphold the democratic value in the country.

“Besides practising objective journalism, media can play a vital role in upholding the country's image through projection of its culture, traditions, history and heritage,” she said.

The Speaker appreciated the role of the newspaper in raising social movement against all the evils in the country.

"We project positive and success stories of Bangladesh across the world by means of media. Once a section of people termed Bangladesh bottomless basket, but now the country is rapidly moving towards development, proving the statement false," he said.

The Bashundhara Group chairman urged all the media outlets to present the glorious history of the country's liberation war and independence to the members of young generation so that they become inspired by a sense of patriotism to work in the greater interest of the country.

Bangladesh Pratidin Editor Naem Nizam received the floral wreaths from the guests and well-wishers of the daily. Shaban Mahmood, special correspondent of the newspaper, moderated the event.

DNCC Mayor Atiqul Islam urged the journalists to raise a social movement for creating awareness among the city dwellers so that they are inspired to practise basic cleanliness for keeping the city clean.

DSCC Mayor Sayeed Khokon appreciated the role of Bangladesh Pratidin for creating social awareness among the people about different issues in the country.

“The business group also can come forward to develop the film industry by producing movies and establishing Cineplex across the country,” the actress said.

Singer Sabina Yasmin appreciated the decade-long journey of the newspaper, which, she said, is satisfying the needs of the readers across the country.

Television personalities Hanif Sangket said Bangladesh Pratidin has been disseminating trustworthy news every where from makeshift houses to high-rise buildings in the city.

Among the awardees, Poet Shamsur Rahman, a key figure in Bengali literature, started off with his first book Prothom Gaan Ditiyo Mrityur Aage hit the Bangla literature in the 60s. His masterpiece Bandi Shibir Theke tells the stories of the country’s glorious liberation movement.

Acclaimed singer Sabina Yasmin is one of the key figures in Bangla music. She is renowned for her patriotic songs as well as her playback singing. She has recorded around 12,000 songs so far. Sabina received numerous awards, including the Shadhinota Padak and Ekushey Padak.

Film star Sarah Begum Kabari vibrated the silver screen for two decades after her debut in the film industry through Subhash Dutta’s Sutarang in 1964. Afterwards, she continued gaining minds of people through her works in Heeramon, Maynamoti, Chorabali and Titas Ekti Nadir Nam. Kabari received many awards, including the Bangladesh National Film Award for Lifetime Achievement.

Legendary actress Farida Akhter Bobita came into light through Satyajit Roy’s film Ashani Sangket. Thereafter continued acting in more than 250 films. She was honoured with National Film Award in 2018 for her outstanding contributions to the film industry.

Hanif Sanket has a special identity in the country’s cultural arena for picking out the unsung heroes of the society through his popular television programme Ittyadi. Sanket was awarded the Ekushey Padak in 2010.

Earlier on March 14 evening, the newspaper started celebrating its anniversary through cutting a cake at its office on EWMGL premises.

Bangladesh Pratidin started its journey on March 15, 2010, as a venture of East West Media Group Limited, the media wing of Bashundhara Group, a leading business conglomerate in the country.

In its decade-long journey, the newspaper has gained popularity among readers in the country and across the globe. The newspaper is also being published from Europe and America.