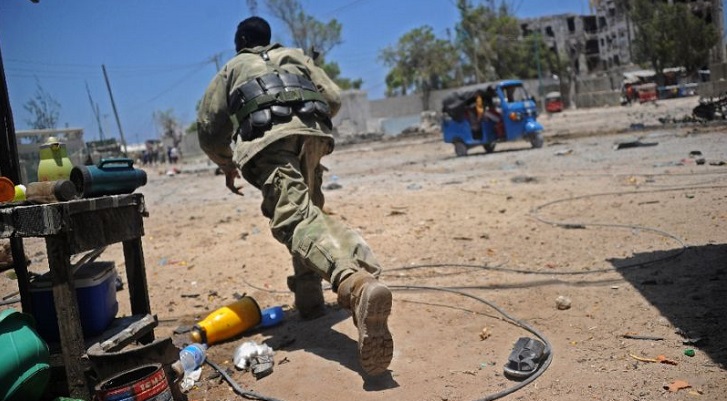 An attack involving gunmen and bomb blasts on a complex housing government ministries in Somalia's capital killed at least 11 people on Saturday, including the deputy labour minister, officials said.

Claimed by the Al-Shabaab Islamist group, the assault was a sign of the insurgency's continued ability to strike at the heart of Somalia's government, despite years of foreign military support for Mogadishu.

The fighting began with two blasts at the gates of the complex housing the labour and works ministries.

Police say at least four gunmen then stormed the buildings, leading to a shootout as officers rushed to confront the attackers.

"The death toll reached eleven, three of them women, and the number of wounded is 15," said Abdukadir Abdirahman Adan, director of Mogadishu's Aamin ambulance service.

"I cannot elaborate on how he died but I can confirm that he was killed inside the ministry building," Hassan said.

Police official Ibrahim Mohamed said all the gunmen were killed.

"There were some other casualties including members of the police," he said, without elaborating.

Attacks that combine bombings with gunmen have become a speciality of the Al-Qaeda linked group, which is running an armed insurrection against what it sees as heretic and foreign influence in Somalia.

The group emerged from Islamic Courts that once controlled central and southern Somalia and are variously estimated to number between 5,000 and 9,000 men.

In 2010 the Shabaab declared their allegiance to Al-Qaeda. The following year, the group were chased out of Mogadishu by the 22,000-strong African Union peace-enforcement mission, AMISOM.

They have since lost many of their strongholds but retain control of large rural swathes of the country and continue to wage a guerrilla war, frequently hitting Mogadishu.

In October 2017 a truck bombing in a busy neighbourhood of the capital killed over 500 people, the deadliest attack in Somalia to date.

Among Al-Shabaab's adversaries is the US military, which has killed over 800 people in airstrikes targeting the insurgents over the last two years.

This week Amnesty International released a report challening the US's claim that the airtrikes only killed "terrorists."

Amnesty researchers say at least 14 civilians were killed in US bombings. The US military denied the report.

The Shabaab have also carried out a string of attacks in Kenya since 2011.

The deadliest of these took place on April 2, 2015 when 148 people were killed at Garissa University in northeastern Kenya.

In 2013, a Shabaab raid on Nairobi's Westgate shopping mall left 67 dead in a siege that unfolded over four days. And in January this year, 14 people were killed in a Shabaab-claimed attack on a luxury hotel complex in Nairobi.