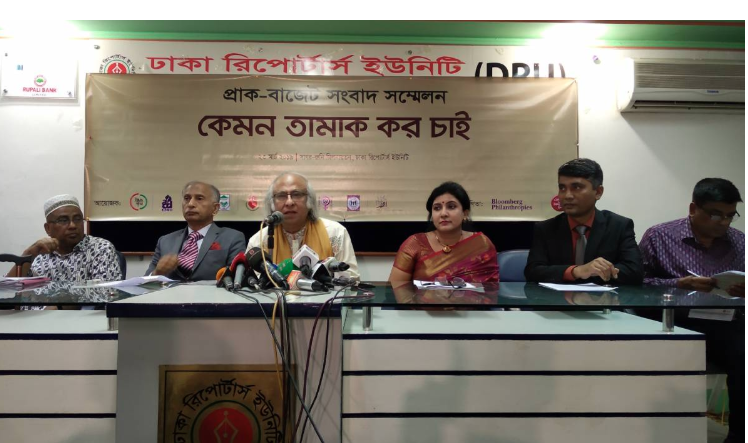 Anti-tobacco platforms on Saturday urged the government to increase tax on tobacco products in the next national budget to curb its usage in Bangladesh.

They said the government should also prohibit electronic cigarette as it is becoming increasingly popular among the young people.

Speakers made the call at a pre-budget press conference – The Tobacco Tax We Demand – at Dhaka Reporters Unity. Mahfuz Kabir, Research Director of Bangladesh Institute of International and Strategic Studies, made some recommendations.

They include breaking the four-segment price slabs for cigarettes into two, abolishing filter and non-filter variation for Bidi, eliminating tariff value system of smoke-free tobacco products and imposing 15 percent VAT on all tobacco retail products.

He also recommended bringing all manufacturers of smoke-free tobacco products under Tax net and facilitating tobacco regulations for implementation.

“If the proposals are adopted, it will encourage nearly 3.2 million current adult smokers to quit (1.3 million cigarettes smokers and 1.9 million bidi smokers),” he argued.

Kabir reasoned that it will also reduce premature deaths by 1 million among current smokers in the long run and will generate between Tk66.8 billion and Tk 119.80 billion or 0.4 percent of GDP in additional tax revenue.

Last year, Health Minister Zahid Malek said various tobacco related diseases kill at least 1,61,200 people each year in the country. In February, a major new study led by Bangladesh Cancer Society estimated costs that smokers impose on the economy at Tk 30,570 crore ($3.6 billion US) a year – which is 1.4 percent of GDP.

Renowned economist Dr Qazi Kholiquzzaman Ahmad, Chairman of the Palli Karma Sahayak Foundation (PKSF) and the National Anti-Tobacco Platform, said smokers will cut down on cigarettes if the prices are hiked.

He said they have been pushing for an overhaul of tobacco taxation system. “The National Board of Revenue and other policymakers often agree with us but the reality does not reflect their support for us,” he said.

Dr Nasiruddin Ahmed, former NBR chairman, said poor people do not care about health as they have access to cheap cigarettes.

“Tough action should be taken against smokers and awareness should be raised about health issues,” he said.

The press conference was organised with the support of Campaign for Tobacco Free Kids at the initiative of PROGGA and Anti-Tobacco Media Alliance, in association with anti-tobacco organisations including National Heart Foundation Bangladesh, Dhaka Ahsania Mission, Association for Community Development, Young Power in Social Action, Bangladesh Institute of Theatre Arts, SUPRO and Tamak Birodhi Nari Jote.