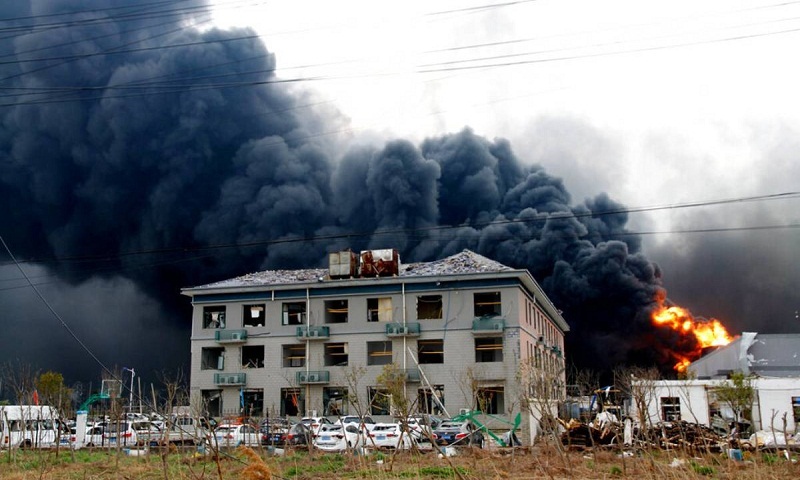 A massive explosion at a chemical plant in eastern China with a long record of safety violations has killed at least 62 people and injured hundreds of others, 90 of them seriously.

The death toll appeared likely to rise still further, with another 28 people still listed as missing, the official Xinhua News Agency reported Saturday. Just 26 of those confirmed dead in Thursday's explosion have been identified, it said.

The blast in an industrial park in the city of Yancheng, north of Shanghai, was one of China's worst industrial accidents in recent years. State-run television showed crushed cars, blown-out windows and workers leaving the factory with bloodied heads.

Schools were closed and nearly 1,000 residents were moved to safety as a precaution against leaks and additional explosions, the city government said in a statement posted to its microblog.

More than 900 firefighters were deployed to extinguish the fire that burned into the night. Windows in buildings as far as 6 kilometers (4 miles) away were blown out by the force of the blast, which caused a magnitude 2.2 seismic shock.

The cause of the blast was under investigation, and people responsible for operations at the plant have been placed "under control," Xinhua said. It wasn't clear whether anyone had been formally arrested.

Drains and waterways running through and from the plant complex have been blocked to prevent toxic chemicals from running into the nearby Yellow Sea, under orders from the Ministry of Ecology and Environment.

The orders covered sewage and rainwater outlets while further assessments of air and water quality were ongoing, Xinhua reported.