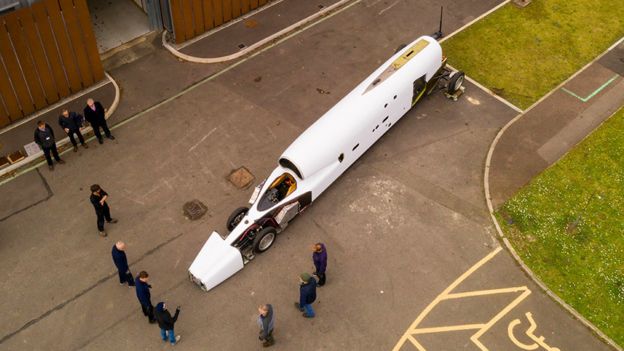 The Bloodhound supersonic car is back, under new management and preparing to renew its pursuit of the land speed record.

The project went into administration last year, unable to secure the financing needed to go racing - even though the vehicle was all but built.

But with the purchase of the car by entrepreneur Ian Warhurst, Bloodhound has been put on a new footing.

Engineers are looking to start high-speed trials "as soon as possible".

These could take place in the South African desert later this year, although team-members are being cautious about giving hard timelines for the re-booted venture.

Warhurst is determined, however, that the new set-up should keep its promises and deliver on its objectives.

"My kids kept saying I should buy a fast car, so I bought the fastest," he joked.

"It is commercially viable. We believe the value of the sponsorship will easily pay for the project," he told BBC News.

People might notice that the patchwork of sponsors' logos has gone. Previous statements of support were all contracted through the old holding company, Bloodhound Programme Ltd, which no longer exists. The new legal entity is Grafton LSR Ltd, which has Mr Warhurst as its CEO.

The HQ has moved. It's no longer in the Bristol suburb of Avonmouth and has shifted along the Severn Estuary to the university technical centre in the Gloucestershire town of Berkeley.

What fans really want to hear, however, is that the financial underpinning of the project has changed. It's understood Bloodhound will still pursue a sponsorship and partnership model, but Mr Warhurst will act as a kind of guarantor, ready to step in if cashflow faces a bottleneck.

Depending how successful the project is in raising funds, the Barnsley entrepreneur, who made his money in turbochargers, could be putting his hand deep into his pocket, or not much at all. But that "safety net" was never there in the past, which meant that when cash coming into the project slowed, it would often be forced into hibernation. Momentum was lost.

There is another key departure from the past approach. Sponsorship opportunities now include the project title and the car's livery. Bloodhound may not stay white and red for long.