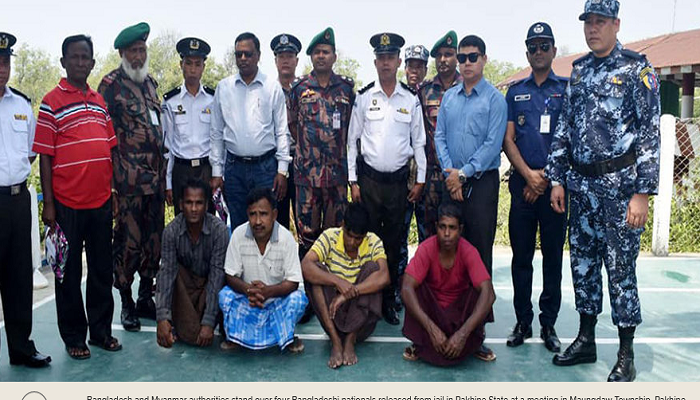 Myanmar on Wednesday handed back four Bangladeshi nationals arrested nine-and-a-half years ago for entering Myanmar waters illegally while fishing the Naff River, which defines part of the border between the two countries.

A delegation from Bangladesh received the nationals at a meeting in the north of Myanmar’s Rakhine State, said Pronoy Chakma, an assistant commissioner of the Teknaf Sub-District of Cox’s Bazar District in Bangladesh.

Two of the men — Muhammad Jashim, 44, and Muhammad Ilias, 29, from Cox’s Bazar’s Nazirpara Village — were sentenced to 21 years and that the other two — Azgar Ali, 39, and Sabbir Ahmed, 36, from Cox’s Bazar’s Maulvipara Village — were sentenced to 25 years, said ASM Mizanur Rahman, a Bangladesh police inspector who attended the meeting in Maungdaw Township.

“They were mainly charged with trespassing. They served nine-and-a-half years and the Myanmar government reduced their sentences,” he said.

Police in Teknaf said Myanmar released Jashim and Ilias from jail on Jan. 24 and the other two on Jan. 28, after the two governments discussed their case.

They said about 30 more Bangladeshi nationals were still in jail in Rakhine, most of them for entering Myanmar waters illegally while fishing.

Mohammad Barikul Islam, the head of Bangladesh’s consulate in the Rakhine State capital, Sittwe, was scheduled to attend the meeting in Maungdaw but could not because of fighting in the area between the Myanmar military and insurgents, the Teknaf officers said.

On its Facebook page the same day, the consulate said the four men had been repatriated.

The officers added that they were soon reunited with their families.