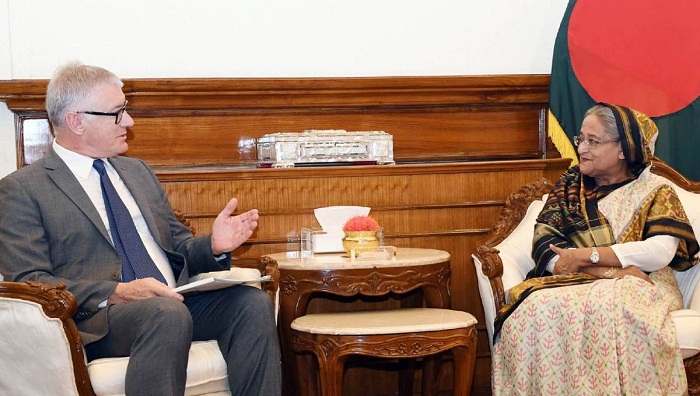 She made the call when IRRI Director General Dr Matthew Morell met her at the Prime Minister’s Office.

The Prime Minister stressed the need for strengthening research works to invent saline-, cold- and draught-tolerant varieties of rice on a large scale, and improve deep water rice varieties.

She emphasised increasing the production capacity of rice in the country continuously as the arable land is declining.

“Our farmers are very smart and quick learners. They can easily adopt technology,” Nazrul quoted the Prime Minister as saying.

Talking about crop pattern, she said Bangladesh cultivates wheat, maize, pulse and other crops in the northern region, which need less water.

Hasina asked the authorities concerned to take steps to boost rice production in the southern region.

She stressed the need for increasing the use of surface water reducing dependence on underground water for irrigation to protect the environment. So, the country’s water bodies, including rivers, canals and beels, are being re-excavated for irrigation, she added.

The Prime Minister appreciated the existing collaboration between the IRRI and BRRI.

The IRRI Director General said IRRI is keen to take a collaborative programme with BRRI to increase rice production in Bangladesh.

Raising a 14-point action plan designed by IRRI under the collaborative programme, he said if the action plan can be implemented, Bangladesh will be able to go on high growth in rice production and sustain the country’s food security.

Dr Matthew said IRRI is interested to work on this action plans in a partnership with BRRI.

The IRRI is an independent, non-profit, research institute founded in 1960. The Philippines-based institute has offices in 17 rice-growing countries, including Bangladesh in Asia and Africa.